Nubia Red Magic 3 is set to launch in China on April 28. The launch event will take place at the RNG eSports Centre in Beijing, Nubia General Manager Ni Fei revealed through a Weibo post on Thursday. The mobile gaming-centric Nubia Red Magic 3 will be the successor to the Nubia Red Magic Mars. Key specifications of the new Nubia phone include a Snapdragon 855 SoC along with 12GB of RAM and a 3,800mAh battery. The Chinese company earlier this month announced that the Nubia Red Magic 3, in addition to the Nubia Alpha smartwatch and Nubia Pods, will arrive in India in May this year.

Fei posted an image on Weibo to confirm the launch date of the Nubia Red Magic 3. The image doesn't reveal any specific details related to the phone, though it confirms the launch venue. Notably, last week, Nubia announced that the Red Magic 3 along with the flexible Nubia Alpha smartwatch and Nubia Pods would launch in India in May. The company, however, didn't mention any concrete availability schedule or price details of the new offerings. 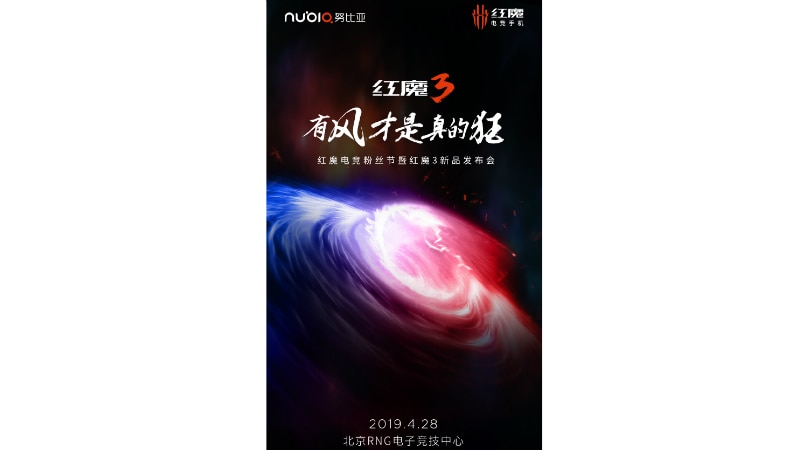 Having said that, Fei last month revealed the key specifications of the Nubia Red Magic 3. He mentioned that the new Nubia phone would include a liquid and air cooling system for thermal management and come with a Snapdragon 855 SoC with 12GB of RAM. The display panel of the Nubia Red Magic 3 is also touted to have a "higher refresh rate than most gaming PCs". This could be a refresh rate of 120Hz or even more.

Further reading: Nubia Red Magic 3, Nubia
Jagmeet Singh Email Jagmeet
Jagmeet Singh writes about consumer technology for Gadgets 360, out of New Delhi. Jagmeet is a senior reporter for Gadgets 360, and has frequently written about apps, computer security, Internet services, and telecom developments. Jagmeet is available on Twitter at @JagmeetS13 or Email at jagmeets@ndtv.com. Please send in your leads and tips. More
Notre-Dame Paris: Firefighters Had a Secret Weapon - a Robot Named 'Colossus'