Share on Facebook Tweet Snapchat Share Reddit Email Comment
Ever since Nokia tied up with Microsoft for launching Windows Phones, the Finnish handset maker has been a major player for the platform. Now a Windows Phone statistics report by AdDuplex for November 2013 has revealed that Nokia dominates the platform with 90 percent market share. Its closest competitor, HTC follows at 7 percent share, while Samsung and Huawei have 1.8 and 1.3 percent market share each, respectively. The report is based on data collected from 2,087 Windows Phone apps running AdDuplex SDK v.2.

The report notes, "It's undeniable that Nokia "owns" Windows Phone device market and it has reached a new milestone this month. 9 out of 10 Windows Phone 8 devices in use are made by Nokia." Further, the report clearly reveals that Nokia's budget smartphone, the Lumia 520 has been the most popular Windows Phone with 26.5 percent market share globally. Notably, the recently unveiled Nokia Lumia 1520 phablet comes at nineteenth position in the Windows Phone 8 chart.

The report also includes Windows Phone devices data for the Indian market which shows the Lumia 520 leading with 43.4 percent, and the Lumia 720 following with 12.7 percent. The report said, "We continue to cover India every month, even though it's getting less interesting lately. The only change worth mentioning is Lumia 625 jumping from #8 to #4 with 5.9%." Other countries included in the report are Australia, France, Germany, Italy, Mexico, Vietnam, UK and US. 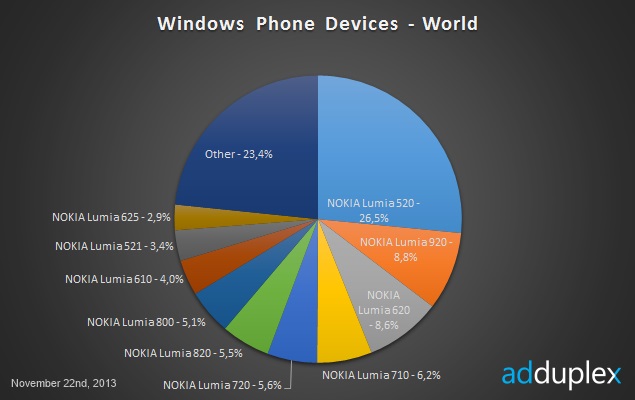 Earlier this month, research firm Gartner claimed that of the smartphones sold in Q3 2013, 81.9 percent were running on Google's mobile platform Android, while 12.1 percent used Apple's iOS and 3.6 percent were on Microsoft's Windows Phone.