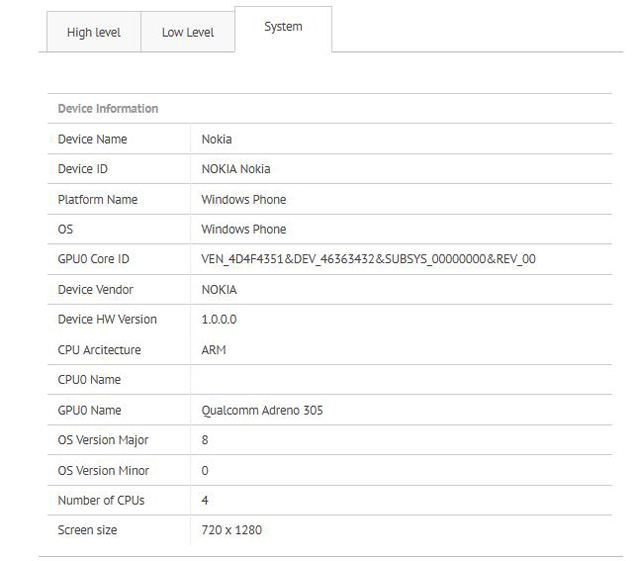 Qualcomm had launched quad-core variant of the Snapdragon 400 recently.

Now, not long after the processor was officially launched, GFXBench results reveal that Nokia might be working on a device featuring the quad-core, LTE-capable chipset already. The benchmark clearly reveals that the device in question is a Nokia device running Windows Phone 8. It also shows that the device sports a four core processor (here referred as the number of CPUs). With the device being powered by the Adreno 305 GPU that comes with the Snapdragon 400, it is apparent that the device is indeed powered by the Qualcomm chipset.

The screen also states that the screen size will be 720x1280 pixels referring to a 720p resolution display. The results do not reveal any possible name or model number for the device as of now.

If the device actually exists, the fact that Nokia grabbed the new processor for production so quickly will not be that surprising. The Finnish manufacturer happens to be the largest Windows Phone 8 smartphone manufacturer as of now with its Lumia range spanning a variety of devices.

Until now, Windows Phone 8 devices have been powered by only dual-core processors. It is possible that Nokia is gearing up to create the first quad-core Windows Phone 8 device already, unless of course Samsung trumps Nokia by unveiling a quad-core phone at its forthcoming event. Samsung is said to unveil new Galaxy and Ativ devices at the event.

Ativ, of course, is the brand name of Samsung's range of Windows- and Windows Phone-based devices that includes mobiles, tablets, and smart PCs.