Notably, the Nokia XL Dual SIM with a 5-inch display is the largest in the Nokia X Android smartphone family, bearing a larger display than the 4-inch Nokia X and Nokia X+ smartphones.

The Nokia XL Dual SIM runs the Nokia X software platform (version 1.0), which is based on the Android Open Source Project (AOSP) and is powered by Microsoft and Nokia services.

The highlight of the Nokia XL of course is the highly customised version of Android, with its Metro-inspired UI and access to Nokia's own store. Much like Nokia X, the Nokia XL Dual SIM also has no access to the Google Play app store; however, users can side-load Android apps from any third-party source. Notably, Nokia has used AOSP corresponding to Android 4.1 Jelly Bean as the baseline for its operating system.

It is powered by a dual-core Qualcomm Snapdragon S4 processor, clocked at 1GHz, alongside 768MB of RAM. It comes with 4GB of inbuilt storage and supports expandable storage up to 32GB via microSD card. 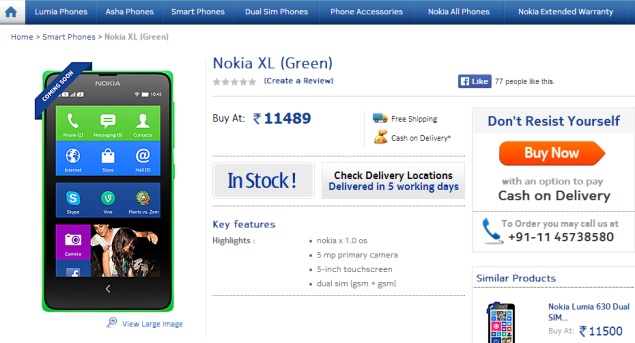 The Nokia XL sports a 5-megapixel rear camera with LED flash and also houses a 2-megapixel front-facing camera. The smartphone packs a 2000mAh battery which is rated to deliver up to 16 hours of talk time and up to 720 hours of standby time.

The Nokia XL Dual SIM comes preloaded with Nokia MixRadio and other social apps such as Facebook, Twitter, WeChat, Viber, and Skype.