Nokia X6 has received a software update that brings the ability to let you hide its notch. With the latest addition, the new Nokia model has joined the bandwagon of Android handsets that do include a notch but offer the ability to transform it into a thin top bezel to please users who don't want an iPhone X-like design. The update importantly comes in the midst of rumours claiming the global launch of the newest Nokia X series smartphone that is presently exclusive to the Chinese market. The smartphone was launched last month as the first from the Nokia brand to feature a display notch. It also includes a dual rear camera setup.

As reported by multiple users on social network Baidu Tieba, the new software update for the Nokia X6 has brought settings to enable or disable the notch. The new development works similar to the options available on the Huawei P20 Pro or OnePlus 6 that adds blacks out the background of the status bar to hide the notch. However, unlike the Huawei and OnePlus models, the Nokia X6 doesn't have an AMOLED display that can completely hide the notch by not lighting up the black areas. This means that you'll be able to see the notch under low light - no matter whether you've disabled it using the new settings. 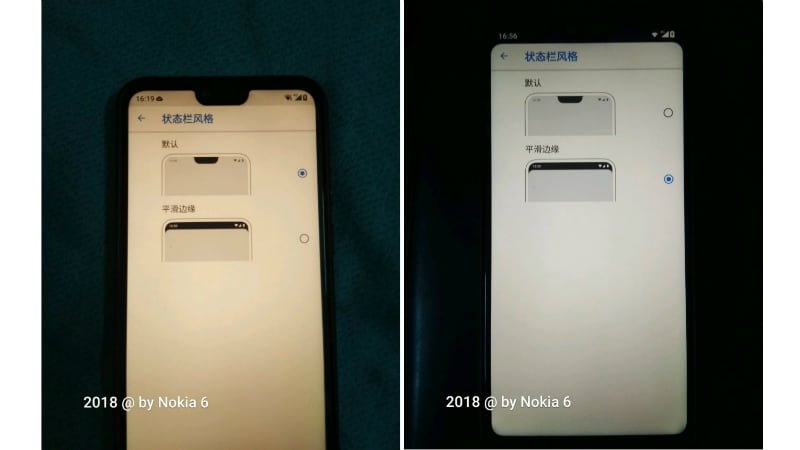 To recall, the dual-SIM (Nano) Nokia X6 runs Android 8.1 Oreo and features a 5.8-inch full-HD+ (1080x2280 pixels) display. It is powered by an octa-core Snapdragon 636 SoC, coupled with up to 6GB of RAM, and 64GB of onboard storage that is expandable via microSD card (up to 256GB). The dual rear camera setup on the Nokia X6 has a 16-megapixel primary sensor and a 5-megapixel monochrome sensor along with an f/2.0 aperture and an LED flash. On the front, there is a 16-megapixel sensor with an f/2.0 aperture. The smartphone has Bothie feature to let users capture images from its front and rear camera sensors simultaneously. Also, it comes preloaded with a Face Unlock feature.

While the Nokia X6 is so far available in China, HMD Global does have some plans to consider its global availability. CPO Juho Sarvikas last month hosted a Twitter poll to understand the demand for the new smartphone in markets other than China. Furthermore, the global variant of the Nokia X6 allegedly received Taiwan's NCC certification earlier this month.