Notably, the Nokia X teaser images do not reveal much about the upcoming device, but it explicitly shows an 'X' mark in a couple of the images. The images have been posted on Nokia's Weibo site, which is the equivalent of Twitter in China. The first teaser image shows two monkeys: one standing below a tree and another on the tree. 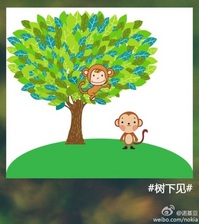 We expect that the Finnish giant is indicating that there might be two devices unveiled at the MWC event scheduled for 24 February. At this point of time, we only know about the long-rumoured Nokia X, earlier known as Nokia Normandywhich has been in news since last year, though there are more than a few Windows Phone offerings also supposedly due at the event.

Nokia also started a countdown page for the MWC event on its official Conversations blog, with a clear 'X' marked, similar to that seen on the teaser map image.

On Monday, Nokia X's alleged press image was leaked, which further cemented the authenticity of the name. The purported press images were leaked via the phone tipster, @evleaks. The post, with an image of a green-colour variant of the handset, seemingly confirmed the name as Nokia X amidst a number of rumours crowding around the device for weeks.

The Nokia X, besides being said to fall between the Asha and Lumia line-up, is said to feature a 4-inch TFT display with a resolution of 480x854 (FWVGA) pixels; a 1GHz dual-core Snapdragon 200 processor; 5-megapixel rear camera; microSD card support and Android 4.4 KitKat. The device was recently spotted under a listing page on a Vietnamese online retailer website.

The Nokia X handset was previously said to sport a 5-megapixel rear camera, however the CamSpeed benchmark hinted that the handset would arrive with a lower 3-megapixel camera.