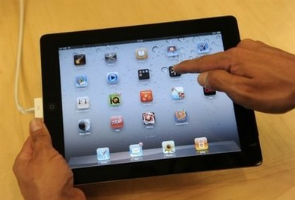 Highlights
The world's leading mobile phone maker Nokia said Tuesday its competitor Apple had agreed to pay royalties for using Nokia technology in its devices, ending all of their ongoing patent disputes.

"The financial structure of the agreement consists of a one-time payment payable by Apple and on-going royalties to be paid by Apple to Nokia for the term of the agreement," Nokia said in a statement.

The Finnish mobile phone giant said details of the contract were confidential.

In a brief statement, Apple said "Apple and Nokia have agreed to drop all of our current lawsuits and enter into a license covering some of each others' patents, but not the majority of the innovations that make the iPhone unique.

"We're glad to put this behind us and get back to focusing on our respective businesses," Apple said.

The deal constitutes a massive victory for Nokia and brings to an end years of tit-for-tat suits that have seen Nokia file 46 complaints against Apple, which has hit back with numerous countersuits against the Finnish company.

Nokia said both companies had now agreed to withdraw all complaints they had filed with the US International Trade Commission.

The Finnish company, which has been struggling to maintain its position as global market leader, also said the deal should have "a positive financial impact" on its second-quarter performance.

Just two weeks ago, Nokia warned that its sales for the quarter would be far worse than previously expected and that it could no longer give a full-year forecast, news which sent its share price to its lowest level since early 1998.

Nordea Bank analyst Sami Sarkamies said the one-time payment by Apple will have a powerful impact on Nokia's second quarter, and that the California tech giant would become one of Nokia's most significant patent clients.

"I believe that with the one-time payment we're talking about hundreds of millions of euros, because Apple hasn't paid anything for any of its iPhones that it's sold (with Nokia technology)," Sarkamies told AFP, adding however that future royalty payments would surely be smaller and less visible in quarterly results.

Sarkamies said he was sure the deal also included concessions to Apple for use of its non-essential patents, such as touchscreen technology, but that these payments were likely considerably smaller than what Apple would have to pay to use Nokia's essential patents.

Ending the disputes, which the companies had been fighting simultaneously in US and European courts, should boost morale at Nokia, which is struggling to reverse plummeting market share at the hands of Chinese manufacturers and smartphone rivals Apple and Google.

In February, Elop announced a radical last-ditch effort to turn around the ailing industry giant by phasing out its own smartphone platforms in favour of a partnership with Microsoft's operating system.

"This is the first good news for Nokia in a very, very long time," Sarkamies said, adding that the agreement should also strengthen Nokia's position in patent rows with other companies in an industry he described as "a tangle of patent conflicts."
Comments