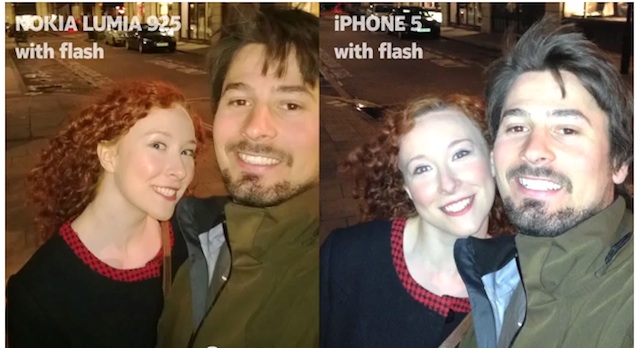 Nokia has released an ad for its Lumia 925 smartphone that parodies Apple's "Photos Every Day" commercial for the iPhone and compares the Lumia 925's camera with that of the iPhone by placing photos side by side in the same frame.

The commercial starts with a voice over repeating the same lines that are featured in the iPhone ad, "Every day more photos are taken on the iPhone than any other phone." However, as we go forward, the voice over talks about how "Nokia prefers to build for quality and not just quantity." The ad then goes on to display side by side comparison shots of pictures taken in different modes on the Lumia 925 and the iPhone 5 including various 'no flash' and 'with flash' photos and Best shot and Motion blur photos. It's not surprising that the photos taken with the Lumia 925 look better than the ones taken with the iPhone 5, in the ad.

After a few more seconds into the ad, it even displays the same scenes that appear in the iPhone ad and the voice over gives the message that, "Every day better photos are taken with Nokia Lumias than with any other mobile."

While Nokia clearly intends to show off the imaging prowess of its Lumia devices, as imaging is the major differentiator in its flagship phones, the parody is in bad taste, and clearly reflects Nokia's frustration at not being able to sell as many Lumia devices as it intends to. The iPhone 5 dwarfs the Lumia phones by a huge margin in terms of sales.

The iPhone has an edge with Apple's app and content ecosystem, and is an all-rounder as its camera is still considered one of the best among all smartphone shooters. It's also the most popular device when it comes to users sharing images on the Internet as more online photos are shot through the iPhone than with any other phone. Nokia's Lumia devices on the other hand are crippled by Windows Phone, Microsoft's mobile operating system which is facing a major app problem, that is even acknowledged by Nokia execs.

It's interesting to note that despite Microsoft releasing similar parody ads for its Surface tablet, the offering has not been able to do well and have yet to make any profit.

HTC teases 'Big Things ahead' on Twitter, hinting at One Max
Rather than time, computers might become panacea to hurt