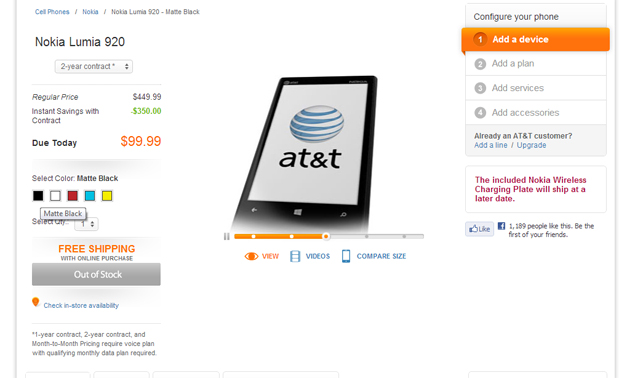 Nokia has been banking on its latest flagship smartphone Nokia Lumia 920 to make a comeback in the smartphone market. And if report published in Yahoo! China is to be believed then Nokia seems to be on the right track as this smartphone has already garnered 2.5 million pre-orders.

Nokia had first showcased its Lumia 920 and 820 smartphones at a gala event in September 2012.

Both Nokia Lumia 920 and Lumia 820 had started shipping in key markets in US, France and UK, followed by Russia and Germany by the fag end of October.

According to reports in Ubergizmo.com, by the mid of Novemeber, Nokia Lumia 920 was sold out Amazon's mobile store, and even at AT&T's website. This momentum is said to have continued all through the Black Friday weekend, with most stores and websites claiming to be out of stock or offering only one or two colour options for Nokia Lumia 920.

One of the major reasons for a good initial response to this smartphone could be the aggressive pricing strategy adopted by Nokia.

Nokia has been offering Lumia 920 in US for $450 without any contract, which is $100 less than Samsung's flagship device Samsung Galaxy S III and $200 less than Apple's iPhone 5. It was earlier rumoured that Nokia will be launching its Lumia 920 in India sometime in November, but later pushed back the same to December. As of now, there is no confirmation about the India pricing of this smartphone.