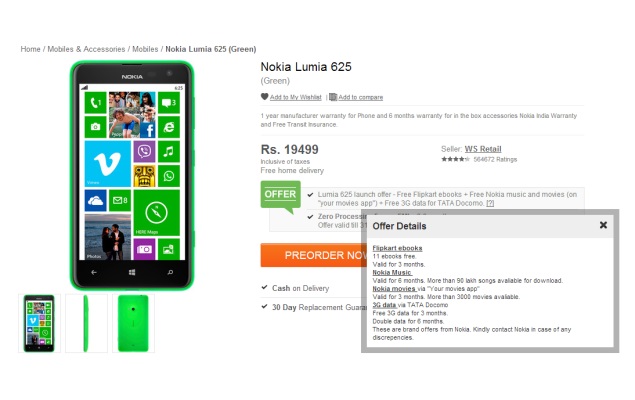 The Nokia Lumia 625 is now available for pre-orders in India for Rs. 19,499 through online retailer Flipkart.

The retailer notes that the estimated release date for the Nokia Lumia 625 is the fifth week of August.

Nokia announced the launch of the Lumia 625 sporting a 4.7-inch LCD screen, its biggest on a smartphone yet, last month. The specifications of the Nokia Lumia 625 include a 1.2GHz dual-core processor alongside 512MB RAM and 8GB internal storage that can be expanded up to 64GB via microSD card. It comes with a 5-megapixel rear camera and a VGA front-facing shooter. The 4.7-inch screen sports a 480x800 pixel resolution. The device runs Windows Phone 8.

Flipkart is also highlighting some promotional offers available with every pre-booking of Lumia 625. This includes 11 free ebooks from the Flipkart store. Users can download these ebooks up to three months from the date of purchase. Also include is a Nokia music subscription which will be valid for 6 months, Nokia movies subscription via movies app on the Lumia smartphone valid for three months. Also included is free 3G data for 3 months or 2G data for 6 months via Tata Docomo.

It has been raining Lumia smartphones of late, with the Lumia 925, Lumia 1020 and Lumia 625 hitting the global markets in quick succession.

With the Nokia Lumia 925 and Nokia Lumia 625 now finally being rolled out for the Indian market, the wait for the 41-megapixel Nokia Lumia 1020 continues.