The still only-rumoured Nokia Lumia 1520, the company's first phablet expected to come with quad-core processor and sport a full-HD display, has been leaked in full ahead of its expected October 22 unveiling.

According to WPDang, the Tmall online store, which is also Nokia's official Internet marketplace for the Chinese market, published a product page for the yet-to-be-announced Lumia 1520. The accidental listing of the alleged Lumia 1520 confirms that the device would come at 4,999 Yuan or $820 which is roughly Rs. 50,200. The listing also conforms some of the specifications which include a 6-inch display with a resolution of 1080x1920 pixels, a quad-core Qualcomm Snapdragon 800 processor, and the popular PureView camera boasting of a 20.7-megapixel sensor. 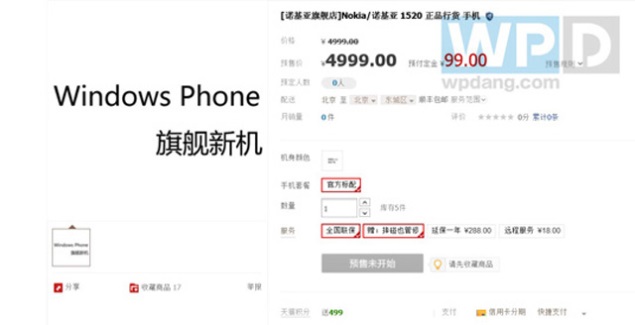 Unfortunately, the listing does not include any image of the rumoured Lumia 1520. However, the accidental leaked listing of the phablet distinctly matches the specifications leaked in multiple reports.

Additionally, the infamous phone tipster, @evleaks has revealed specifications of the Lumia 1520 yet again. The tipster confirms that the Lumia 1520 will come Snapdragon 800 processor, 6-inch 1080p display, 2GB RAM and will come in storage variants 16 and 32GB.

Earlier reports had confirmed that Nokia will unveil six new devices at its October 22 event, due to be held at Nokia World in Abu Dhabi, according to a recent report

The report further suggested that Nokia might unveil the long-rumoured Lumia 1520 phablet along with company's first Windows RT tablet, the Lumia 2520. Other Nokia devices expected to be unveiled at Nokia World include the Lumia 525, which is said to be the successor to the Lumia 520; Nokia Asha 502, the successor to the popular Asha 501 and Treasure Tag, likely to work with Bluetooth 4.0 and Bluetooth Low Energy standards.