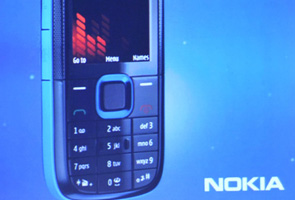 Highlights
Finland-based mobile phone maker Nokia has announced its foray into the dual-SIM mobile phone segment in India with the launch of two new handsets, a move aimed at strengthening its market share in the country.

The Indian handset market, which was once dominated by the likes of Nokia, Samsung and LG, has seen homegrown brands such as Micromax, Spice, Karbonn and Zen giving tough competition to the global giants with feature-rich phones and ultra-low prices.

The two handsets - C1 and C2 - are the first two dual SIM handsets being launched, she added.

"The dual SIM market in India has taken off well, mainly due to the tariff war amongst telecom operators. People have more than one SIM to get benefits from various offers and hence the dual-SIM segment has grown. The segment is significant and we feel that it is the right time to enter this market," Nokia India Managing Director D Shivkumar told reportersin New Delhi.

The Nokia C1 (C1-00), which is priced at Rs 1,999, comes equipped with flashlight and FM radio. It will have a 'call divert' feature to ensure that users don't miss a call from either of the two SIMs. However, the handset can only be used for voice and SMS.

The Nokia C2, which will be available later this year, will allow users to access services like Ovi Life Tools and Ovi Mail. It will also have a music player and support micro-SD cards of up to 32 GB capacity. Nokia's Ovi Life Tools provides users with a range of information covering healthcare, agriculture, education and entertainment.

Other multinational handset-makers like Samsung already have dual-SIM handsets in the market. Most handsets launched by the domestic companies are dual-SIM phones.
Comments

Suspension of BlackBerry service may not give solution: Canada
MySpace users can now sync posts to Facebook