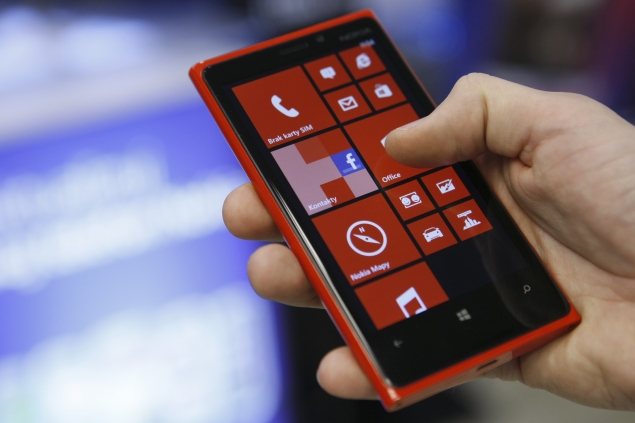 Struggling Nokia Corp. turned a net profit of euro 202 million ($270 million) in the fourth quarter, compared with a loss of $1 billion a year earlier, but revenue fell 20 percent as it failed to make gains in the fiercely competitive smartphone market.

Nokia gave a grim outlook saying it expects operating margins in the first quarter of this year to be "approximately negative 2 percent, plus or minus four percentage points." It cited increased competition and lower-than-expected demand for its flagship Lumia phones and cheaper Asha models.

Nokia sold 15.9 million smartphones in the quarter, down from 19.6 million a year earlier, including 4.4 million Lumia phones. In all, it sold 45 million mobile phones in the period, 15 percent less than in 2011.

CEO Stephen Elop said he was encouraged that the company's strategy had reached "underlying profitability" and strengthened its financial position but cautioned that more cutbacks could be expected.

"We remain focused on moving through our transition, which includes continuing to improve our product competitiveness, accelerate the way we operate and manage our costs effectively," Elop said.

Elop said Nokia Siemens Networks "drove record profitability" during the quarter. The networks unit - a joint-venture with Germany's Siemens AG - saw its operating profit surge to euro 251 million from euro 67 million the previous year, while revenue was up 5 percent at euro 4 billion.

The unit has been loss-making for years but restructuring measures including substantial job cuts have improved its performance.