Two industry source told Reuters that the Finnish group, which is struggling to recoup ground lost to its rivals, cut the price of its mid-range Lumia 800 Windows Phone by around 15 percent this week and made smaller reductions on other Windows models.

Nokia shares continued falling on Thursday after slumping 13 percent on Wednesday as the firm unveiled two new Windows Phone models in what may be the last major shot at reclaiming market share lost to Apple Inc, Samsung Electronics Co Ltd and Google Inc.

Nokia did not disclose the price or roll-out dates of the new models and its share fell a further 5.3 percent to 1.88 euros by 1135 GMT on Thursday.

The company did not officially confirm the price cuts but said such steps were a normal part of its business. 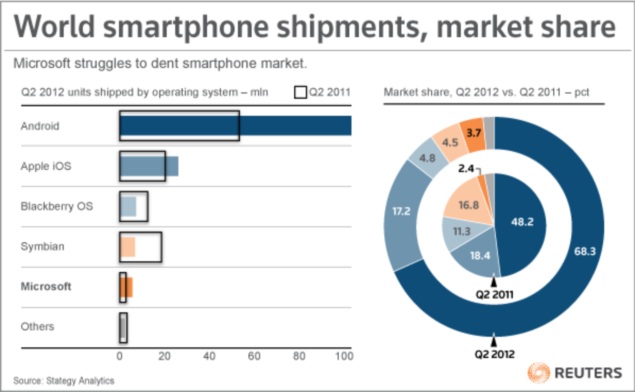 The lower prices will hurt Nokia's bottom line, particularly in September and October as analysts expect the new models to begin contributing to results only the following month.

Analysts said the new models would probably reach the market by November at the earliest, with the high-end 920 model likely to sell for a price similar to the next Apple's iPhone. This will be unveiled next week and probably go on sale this month.

Following Nokia's product launch Deutsche Bank and Societe Generale both cut their recommendation on the stock to "sell".

Retail prices of smartphones using Google's market leading Android software have dropped below $100, a level other smartphones are struggling to reach due to their high requirements on features like processing power.