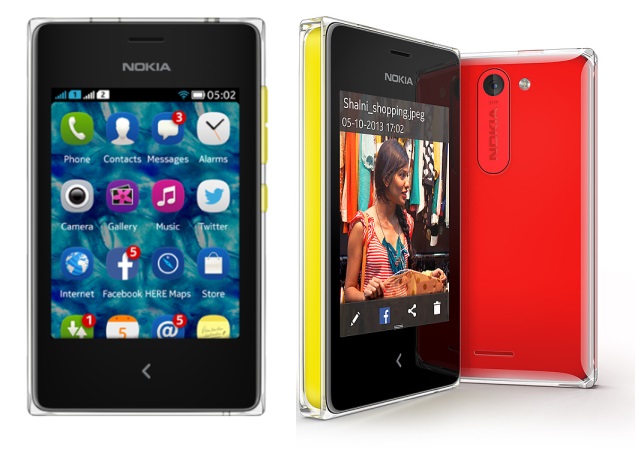 Nokia has launched its latest feature phone in the Indian market, the Asha 502, priced at Rs. 5,739. The Nokia Asha 502 is now available on Nokia's online store.

The Finnish handset maker unveiled the Asha 502 in October at Nokia World alongside Asha 500 and Asha 503.

The Nokia Asha 502 is based on Nokia Asha Platform 1.1 and supports firmware over-the-air (FOTA) update. It features a 3-inch LCD display with a resolution of 240x320 (QVGA) pixels. Unlike the Asha 500, the Asha 502 comes only in dual-SIM (GSM+GSM) variant with Nokia's Easy Swap technology and also supports dual standby. Notably, the Asha 502 supports Micro-SIM card instead of regular SIM size.

It comes with 1010mAh battery which can deliver up to 480 hours of standby time and up to 14 hours of talktime. It measures 99.6x 59.5x11.1mm and weighs 100 grams. The Nokia Asha 502 sports a 5-megapixel rear camera with LED flash. It comes with expandable storage support up to 32GB with the help of microSD card.

The Nokia Asha 502 features the updated Fastlane app, which was introduced in Asha 501. Nokia claims that it has reworked the interface of the new Asha 502 and that it comes with one-swipe access to camera app and one-touch sharing feature on WhatsApp. For now, there is no word about an India launch of the Asha 503.

Earlier on Monday, Nokia launched its first Windows Phone phablet in India, the Lumia 1520, at Rs. 46,999. The Lumia 1520 will be available in Red, Black, Yellow and White from Monday.

The Nokia Lumia 1520 comes with a 6-inch full-HD (1080x1920) LCD display, the biggest seen on a Nokia phone yet, and sports a 20-megapixel PureView camera accompanied by dual-LED flash.