Nokia 9 PureView smartphone is here, after months of leaks and speculation. HMD Global on Sunday introduced the smartphone at a press event in Barcelona on the sidelines of the Mobile World Congress 2019. Part of Google's Android One programme, the Nokia 9 PureView's biggest highlight is its penta-lens camera setup present on the back of the smartphone. The camera setup houses three monochrome and two RGB sensors - all with the same f/1.82 lenses. Other key specifications of the phone include a 5.99-inch 2K screen, Qualcomm Snapdragon 845 SoC, and 6GB of RAM. Targeted at the camera enthusiasts, the Nokia 9 PureView will be competing with the likes of Samsung Galaxy S10+, Huawei Mate 20 Pro, and Sony Xperia 1 smartphones.

The India-specific pricing and availability details remain a mystery for now, however we expect the Nokia 9 PureView price in India would be inline with the global pricing for the phone. We hope to hear from HMD Global over the India launch plans over the coming days.

Starting with the imaging capabilities of the phone, the Nokia 9 PureView's camera system has been developed in partnership with Light. HMD Global has also worked with Qualcomm and Google to optimise the camera setup to fully utilise the Snapdragon 845 SoC's power and work well Google's Photos app. The phone packs five rear cameras with Zeiss certified lenses, which are joined by three 12-megapixel monochrome sensors and two 12-megapixel RGB sensors. Each of these cameras is triggered when a person takes a shot and then the phone fuses these photos together to create a single image. In the front, there is a 20-megapixel selfie shooter. 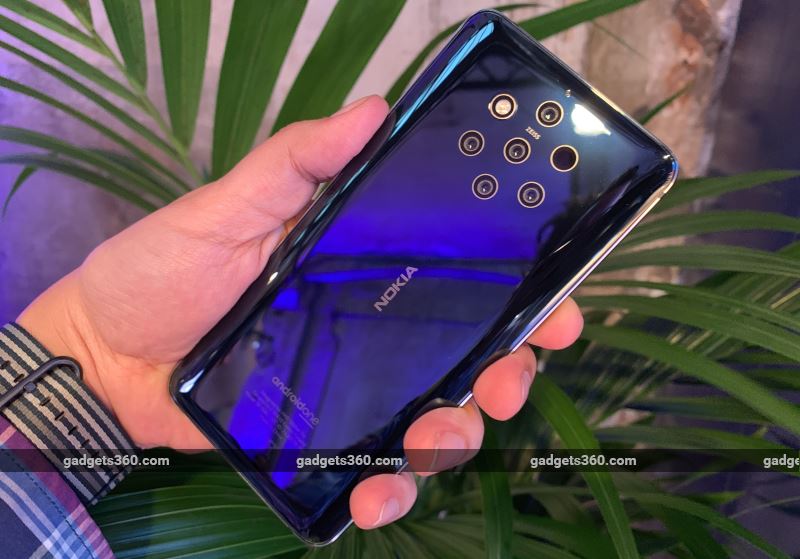 Among other specifications, the phone sports a 5.99-inch Quad-HD+ (1440x2960 pixels) POLED screen with 18.5:9 aspect ratio and an in-display fingerprint sensor. The Nokia 9 also packs 6GB of RAM, 128GB of inbuilt storage, and 3,320mAh battery with wireless charging support. Additionally, the company has included the connectivity options like Wi-Fi 5, Bluetooth 5.0, and NFC. The Nokia PureView is also IP67 certified for water and dust resistance and packs a USB Type-C port. There is no 3.5mm audio jack though.

On the software front, as we mentioned earlier, the Nokia 9 PureView runs on Android 9 Pie and will come with next-generation Pro Camera user-interface, which will allow the consumers to take effective control of the penta-lens setup, including allowing them to take native monochrome shots.