The delayed launch of the Nokia 9 has led to several leaks of the smartphone so far, and the fresh one brings photos that show off its front design. The display screen is seen housing bezels on the top and bottom edges both. The Nokia 9 is rumoured to not adopt a punch-hole design or a display notch design, and these photos corroborate those claims. The Nokia 9 is also reported to come with a penta-lens camera setup - a first in a smartphone that is expected to be equipped with five sensors, one LED flash, and another dual sensor as well. There's been another interesting leak on the interwebs and it shows a separate Nokia flagship-grade device with a completely different design.

The Nokia 9, for starters, has been leaked in photos yet again, and this time the display panel has been snapped from all angles. These photos, shared by SlashLeaks, are in line with what has been leaked previously, and show the smartphone sporting bezels on the top and bottom edge. The bezels aren't very thick, with the top portion slimmer than the bottom portion. There's no hole for a front speaker seen at the bottom edge, and the top edge houses all the necessary sensors including the selfie snapper. There's also the Nokia branding seen on the top edge of the device, while the bottom edge is kept blank.

For those unaware, the Nokia 9 has been HMD Global's rather ambitious flagship project that is reported to have seen several delays. The delays are largely attributed to the complicated rear camera setup that has as many as seven holes placed in a hexagon format. The company was rumoured to launch it sometime in mid-2018, but hasn't been able to so far. Now, the launch date is pegged at early 2019.

Coming to the second leak, a new Nokia device has been snapped showing the front and back design. The tipster suggests that the device is powered by the Snapdragon 845 SoC and sports an in-display fingerprint scanner, which means it sits in the premium segment. The photos have leaked on Weibo, and it shows an almost bezel-less device with no notch up top, and a slight chin at the bottom, that houses the branding. The back is seen sporting a reflective metal panel, with a triple rear camera setup aligned vertically. There's no rear fingerprint sensor in sight as well. The selfie sensor may be hidden in a motorised or a manual slider design. 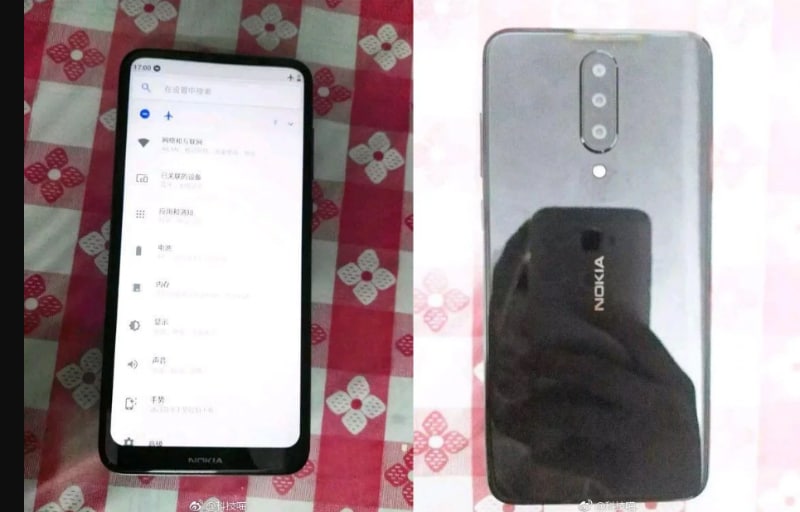 This is the first time we're hearing of another Nokia device powered by the Snapdragon 845 SoC, apart from the Nokia 9. The Nokia 9 was supposed to be the first true flagship from HMD Global, but this leak suggests that the company may look to bring another smartphone to the table as well. Maybe, this one's Plan B, if things really go downhill with the Nokia 9? Only time will tell.