Even though we are just over three days away from HMD Global's Mobile World Congress (MWC) event, where the company will talk about the new Nokia smartphones for this year, the leaks about the much-anticipated Nokia 9 PureView don't seem to be stopping. After the just announced Samsung Galaxy S10 family, Nokia 9 has clearly become one of the most leaked smartphones in the recent times. Now, a tipster has shared the alleged official renders of the smartphone and has claimed that HMD Global will also introduce three more smartphones at MWC - Nokia 4.2, Nokia 3.2, and Nokia 1 Plus.

Known tipster Ishan Agarwal has published several purported renders of the upcoming Nokia 9 PureView on Twitter. The renders are in line what we have seen so far in the previous leaks and have also seemingly confirmed that the Nokia 9 will be based on the Android One platform, as was revealed in a leak originating from US regulator FCC. Agarwal hasn't shared any new details about the Nokia 9 PureView, but if past leaks and rumours are any indication, we will see Qualcomm Snapdragon 845 SoC, an in-display fingerprint sensor, and 18W fast charging support on the Nokia 9 PureView. 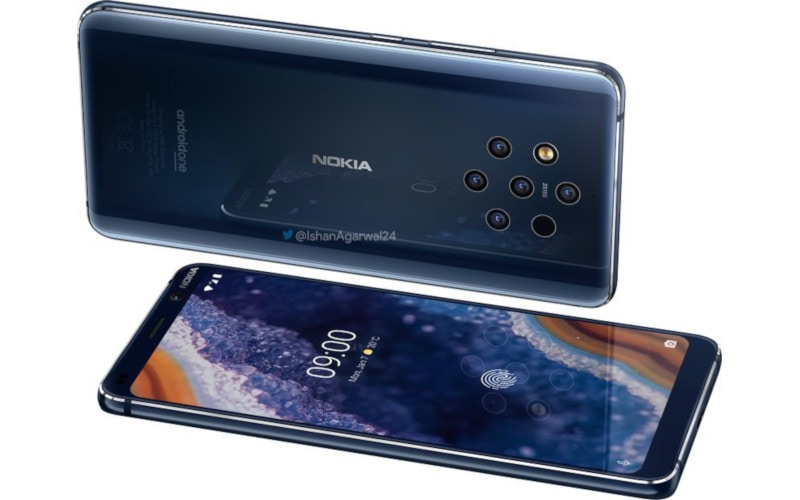 A Nokia 9 listing, which was spotted on Google's Android Enterprise website, had suggested the presence of just 4GB of RAM, 128GB of inbuilt storage, and NFC on the smartphone. It is not known if the phone will have a variant with beefed up RAM and storage. The listing had also noted that the phone will come with a 6-inch display.

In terms of the imaging capabilities, which are said to be the phone's unique selling point (USP), the phone is believed to be housing a five-camera setup, as can be seen in leaked photos above. A recent rumour had suggested that Nokia 9 may be using imaging company Light's technology. The specifics of the sensors and lenses are a mystery at this point.

Thanks to the official teaser from HMD Global, we already know that Nokia 9 will be unveiled at the Mobile World Congress next week.

Ishan Agarwal also writes that HMD Global will announce the Nokia 4.2, Nokia 3.2, and the Nokia 1 Plus smartphones at the MWC. According to Agarwal, the Nokia 4.2 will be offered in Black and Pink colours, whereas the Nokia 3.2 will arrive in Black and Silver. The Nokia 1 Plus will get three colour variants – Blue, Black, and Red. This is the first time we are hearing about the Nokia 4.2 and Nokia 3.2, however the Nokia 1 Plus has leaked previously. As per the leak, the smartphone will sport a screen of unknown size with a resolution of 480x960 pixels, an aspect ratio of 18:9, and a screen density of 213ppi. It is said to be powered by quad-core MediaTek MT6739WW SoC clocked at 1.5 GHz and will be joined by 1GB of RAM. The phone is also expected to run on Android 9 Pie (Go Edition).