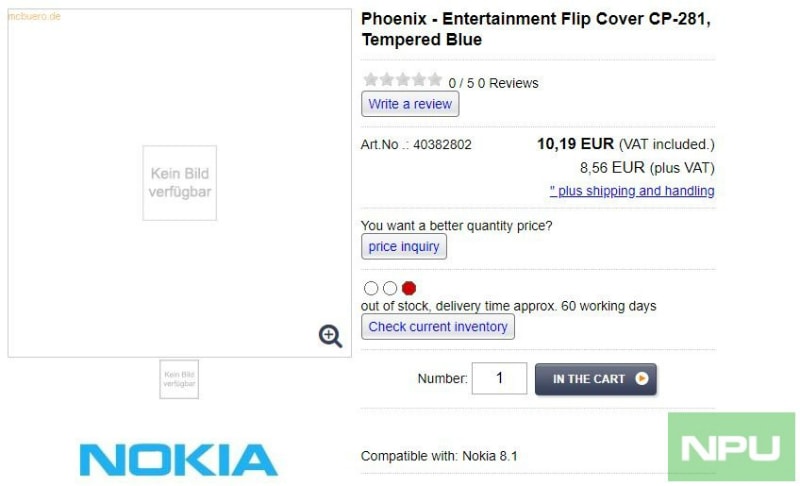 Nokia Phoenix cases were listed online, and were said to be compatible with Nokia 8.1

HMD Global has been rather confusing when it comes to naming its portfolio of smartphones, with the same devices having different names in China, and a different name in other regions. Now, as per listings of official cases, the alleged Nokia Phoenix is nothing but the Nokia 8.1 which has already been launched in China as the Nokia X7 smartphone. Furthermore, listings of official cases of the Nokia 9 have also been leaked, along with case images revealing the penta-lens camera setup at the back.

NokiaPowerUser reports that the Nokia Phoenix cases with model number CP-181 for the clear case and CP-281 for the flip cover have surfaced online. Both the listings state that the cases are compatible with the Nokia 8.1, which means that the Nokia 8.1 is the Nokia Phoenix. Back in the day, the Nokia X7 was heavily rumoured to be the Phoenix, and this could mean that the global variant of the Nokia X7 is the Nokia 8.1 and not Nokia 7.1 Plus, as the tradition has been. This further deepens the vortex of naming mayhem by HMD Global, confusing consumers even more. In any case, this is pure speculation, and HMD could well just continue with the Nokia 7.1 nomenclature, and we recommend you take everything with a grain of salt.

Separately, listing for the official Nokia 9 PureView case has also been leaked by NPU, and the premium clear case with model number CC-190 has apparently been released to distributors and retailers alike, hinting at an imminent launch of the smartphone. Furthermore, the Nokia 9 cases have also been leaked on SlashLeaks, and it shows how the penta-lens camera setup will look on the upcoming device. The company is expected to launch both the Nokia 9 and the Nokia 8.1 at its December 5 event.

If the Nokia 8.1 is similar to the Nokia X7, it is expected to sport a notch, a dual camera setup at the back, and the fingerprint scanner below it. It's price in India is tipped to be at Rs. 23,999, and key specifications include stock version of Android Pie out-of-the-box, 6.18-inch full-HD+ display, octa-core Qualcomm Snapdragon 710 SoC, paired with 4GB/ 6GB of LPDDR4X RAM and 64GB/ 128GB of inbuilt storage. It is is expected to sport a dual rear camera setup with a primary 12-megapixel sensor and a secondary 13-megapixel sensor. On the front, the handset will bear a 20-megapixel selfie camera with f/2.0 aperture and fixed focus. There will most likely be a 3,500mAh battery under the hood, with support for 18W fast charging.

Based on recent reports, the Nokia 9 will run Android 9 Pie out-of-the-box and feature a 6.01-inch display along with a Gorilla Glass 5 protection. It is also rumoured to have a Qualcomm Snapdragon 845 SoC, coupled with up to 8GB of RAM and 256GB of inbuilt storage. There could be single and dual-SIM options and a 4,150mAh battery. The long-anticipated Nokia 9 with its rumoured Penta-lens camera setup was expected to be HMD Global's rumoured flagship for 2018 despite being delayed on multiple occasions. However, a previous report had claimed that the smartphone may not be unveiled this year at all and instead launch at MWC 2019 early next year. Since major flagships are seldom ever launched in the month of December, we are not entirely sure that the Nokia 9 will make it to the Dubai event. It is expected that we will get more details about the smartphones in the run-up to the unveiling.

Alongside these two phones, the company is also expected to launch the Nokia 2.1 Plus at the event as well.