Nokia 8000 4G will reportedly come preloaded with WhatsApp and Facebook. 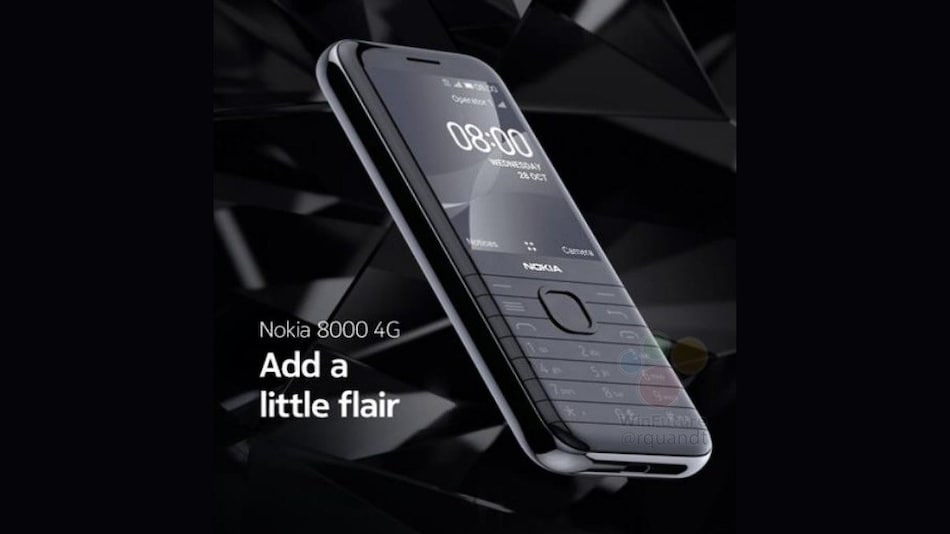 Nokia 8000 4G design details have surfaced online in a leaked poster, which features the first purported image of the revamped feature phone. As per the leak, the phone won't feature the slider design of the original Nokia 8000 series. The new variant is seen on the poster with slightly curved edges on the side and ‘3D curved' designed keys. The poster says that Nokia 8000 4G will have a ‘premium glass-like design.' The report that shared the poster has also detailed specifications of the phone, matching those that surfaced recently when was spotted on a telecom operator's site along with Nokia 6300 4G, indicating a release soon.

In its report, WinFuture shared a poster of Nokia 8000 4G that mentions that the feature phone will come preloaded with WhatsApp and Facebook. It mentions that Nokia 8000 will support 4G and Wi-Fi hotspot for connectivity. The phone is visible in a black colour variant, but it is possible that it will be offered in other colour options too. HMD Global hasn't revealed any information about the phone so far.

Nokia 8000 4G will run KaiOS and be powered by Qualcomm Snapdragon 201 SoC under the hood, as per the report. It is expected to feature a 2.8-inch LCD display with 320x240 pixels resolution. The upcoming Nokia phone is expected to feature 512MB of RAM and 4GB of onboard storage that can be expanded up to 128GB via a microSD card.

The dual-SIM feature phone is said to pack an exchangeable 1,500mAh battery and sport a 2-megapixel camera on the rear. The above specifications shared by WinFuture corroborate those spotted in an earlier operator listing, which additionally mentioned the Nokia 8000 4G is expected to come with model number TA-1303 and measure 132.2x56.5x12.3mm.