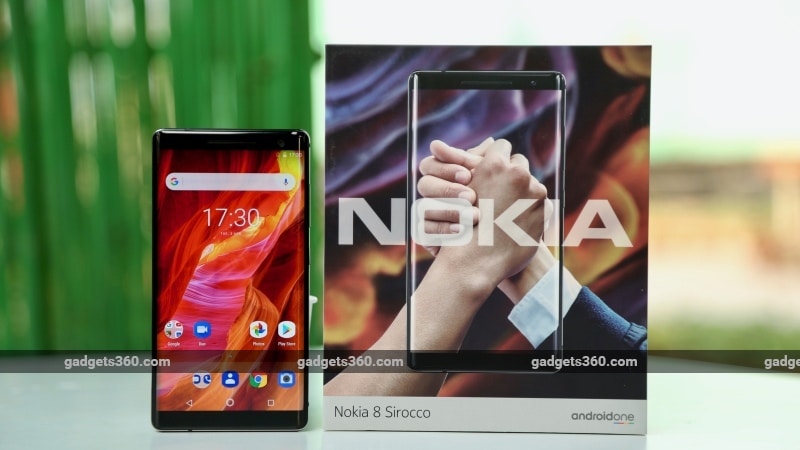 Nokia 8 Sirocco has been launched in India by HMD Global. A fairly comprehensive update to last year's Nokia 8, the 8 Sirocco comes with a curved 5.5-inch pOLED display, IP67 dust and water resistance, wireless charging and a new dual camera setup with 2X optical zoom. The smartphone features an all new design with a curved glass finish and a precision crafted stainless steel frame which HMD Global claims is 2.5 times stronger than the series 6000 aluminium used in the Nokia 8. It is just 7.5mm thin and has minimal bezels up front. The Nokia 8 Sirocco is a part of the Android One initiative and as such is set to receive swift updates. At the launch event in New Delhi, HMD Global also announced the launch of the Nokia Mobile Shop - the company's online store for India. The Nokia 6 (2018) was also launched at the event, as was the Nokia 7 Plus.

The Nokia 8 Sirocco price in India has been set at Rs. 49,999 (best buy price). It will be available via Flipkart, the Nokia Mobile Shop, and select retail outlets such as Sangeetha, Poorvika, Big C, Croma and Reliance Digital. The smartphone will only be sold in a single Black colour variant. Pre-bookings start from April 20, and the smartphone will go on sale from April 30.

As for the launch offers, Airtel prepaid users will get 20GB additional data on each of the first six recharges (Rs. 199 and Rs. 349), and postpaid subscribers will get complimentary 20GB per month on plans priced at Rs. 399 and Rs. 499 plan for 6 months. Airtel customers will also get an extended free subscription to the Airtel TV app till December 31, 2018. Buyers will also get 25 percent instant discount on domestic hotels on bookings made via MakeMyTrip. Purchases made using ICICI Bank cards will get 5 percent cashback till May 31; the handset will be available with no-cost EMIs on credit cards, Bajaj FinServ, and Home Credit.

The single-SIM (Nano) Nokia 8 Sirocco is a part of the Android One initiative and runs Android Oreo 8.1 out-of-the-box. It comes with a 5.5-inch QHD (1440x2560) pOLED display which curves at the sides, has an aspect ratio of 16:9 and is covered by 3D Corning Gorilla Glass 5. It is powered by the octa-core Qualcomm Snapdragon 835 SoC paired with 6GB of LPDDR4X RAM.

The Nokia 8 Sirocco has 128GB of storage built-in which cannot be expanded in any way. On the connectivity front, the smartphone supports 4G VoLTE, Wi-Fi 802.11ac, Bluetooth v5.0, GPS/ A-GPS, and NFC. Sensors on board include an an accelerometer, ambient light sensor, barometer, digital compass, fingerprint sensor, gyroscope, and proximity sensor. It measures 140.93x72.97x7.5mm and has a non-removable 3,260mAh battery rated to deliver up to 22 hours of talk time and 495 hours of standby time.