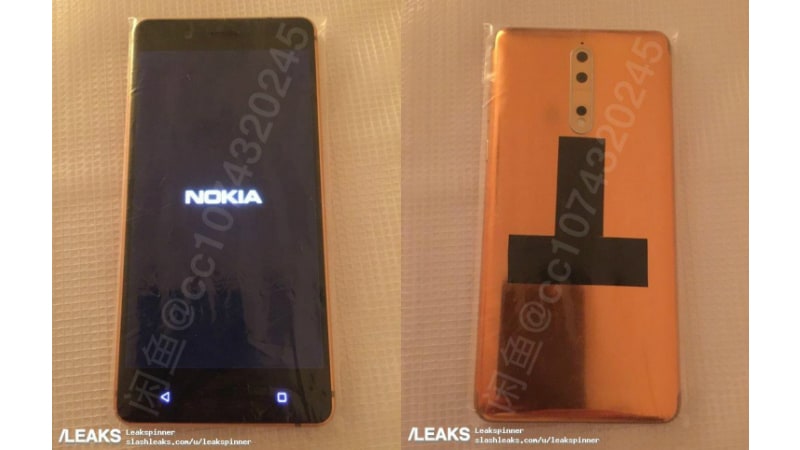 After the live images of the Copper Gold variant of HMD Global's flagship smartphone Nokia 8 cropped up last week, new images have now surfaced corroborating past information. The Nokia 8 is set to launch on August 16 at an event in London, and there's a lot that has been leaked about the smartphone. Now, the price and design details have been highlighted in fresh leaks once again. Also, digitally created renders of the entry-level Nokia 2 have also cropped up online, giving more details on design and specifications.

Romanian site mobilissimo.ro reports that in Romania, Vodafone has listed the Nokia 8 for EUR 517.42 (roughly Rs. 38,900) outright. This is significantly lower than the rumoured price of EUR 589 (roughly Rs. 43,400) tipped earlier. Also, because the pricing policy in other western European markets is the same, expect the smartphone to cost the same in Germany, Italy, Spain, and other countries (except for VAT tax difference). In India, the smartphone's price is tipped to be at Rs. 44,999.

Chinese social site Baidu is the host of newly leaked photos of the Nokia 8's Copper Gold variant in action, with the screen in a working condition. It corroborates past leaks, and the Nokia 8 is seen having sufficient bezel, capacitive buttons for navigation, and a home button underneath which the fingerprint scanner will be integrated. It seems to sport a metal body and the biggest highlight is the vertical dual camera strip at the back, courtesy Carl Zeiss optics. Interestingly, there are four holes in the camera ring - two for sensors, one for flash, and the last one is presumed to be for laser autofocus. However, that's just pure speculation, and the fourth hole could serve a completely different purpose.

The Nokia 8 volume and power keys are both housed on the right edge of the smartphone. Past renders suggest that the 3.5mm audio jack sits on the top edge, while it will sport a Micro USB port i.e. no fast charging. At launch, the Nokia 8 may be available in four colour options - Blue, Steel, Gold/Blue, and Gold/Copper.

Separately, the entry-level Nokia 2 has also been leaked, courtesy Weibo, and the smartphone's renders are made based on rumoured leaks before. In the images, the Nokia 2 is tipped to sport a 4.5-inch HD (720x1280 pixels) display, a Snapdragon 212 processor, 8GB internal memory, 8-megapixel rear camera, 5-megapixel front camera, and runs on Android 7.1 Nougat out of the box.

Design wise, the imagined renders show no fingerprint sensor at the front or back, no Home Button, and on screen navigation keys as well. The camera setup at the back sits inside a capsule-like ring, and the Nokia branding is seen at the front and back. The volume and power keys are on the right edge of the smartphone. The Nokia 2 is also tipped to be launched alongside the Nokia 8 on August 16, however this should be taken lightly.