Nokia 8 was launched in India back in September 2017 with Android 7.1.1 Nougat

Sarvikas tweeted that the anticipated Android 9.0 Pie update for the Nokia 8 is now being rolled out in India. Multiple users on Twitter also confirmed the debut of the Android Pie update on their Nokia 8 handsets. Moreover, the screenshots posted by the users highlight that the new software update brings the February 2019 Android security patch alongside the core Android Pie features.

Amongst major changes, the Android Pie update for the Nokia 8 brings new gesture-based system navigation as well as features such as Adaptive Battery and Adaptive Brightness. The update also adds Digital Wellbeing to help you curb addiction with your device. Furthermore, the new software brings the February 2019 Android security patch.

Users can check the availability of the Android Pie update on their Nokia 8 devices by going to the Settings > About phone > System updates. The update is apparently around 1.5GB in size. 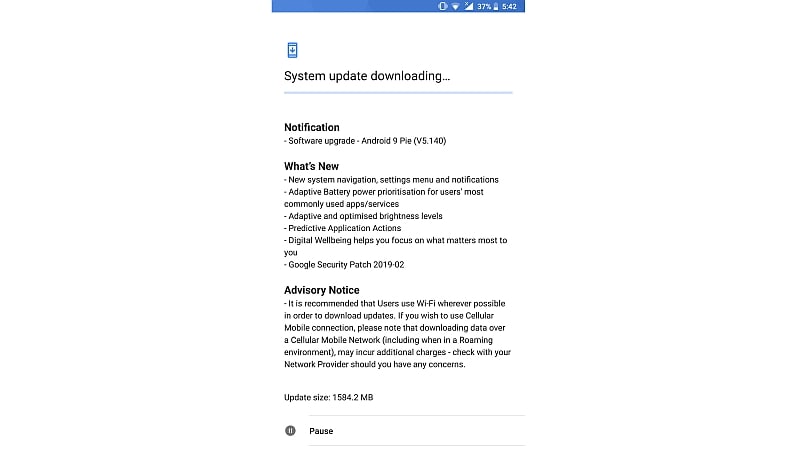 As we mentioned, HMD Global started rolling out the Android Pie update in phases for the Nokia 8 in global markets back in December last year -- after a brief delay due to issues. The smartphone was launched in India with Android 7.1.1 Nougat, though it got the Android 8.0 Oreo update in November 2017 and received Android 8.1 Oreo in February last year.

For photos and videos, the Nokia 8 dual rear camera setup with two 13-megapixel image sensors - one as an RGB sensor with optical image stabilisation (OIS), while the other one has a monochrome sensor. Both sensors have an f/2.0 aperture, PDAF, 76.9-degree wide-angle lens -- accompanied with a dual-tone LED flash and an IR rangefinder. For selfies, there is a 13-megapixel camera sensor at the front.