Nokia 1.3 and Nokia 5.3 will go on sale next month, while Nokia 8.3 will be available for purchase in Summer.

Nokia 8.3 5G, Nokia 5.3, and Nokia 1.3 have been launched as the three new smartphones by HMD Global. While the Nokia 1.3 is the latest entry-level Nokia smartphone in the portfolio, the Nokia 5.3 is targeted at customers looking for an affordable smartphone. The Nokia 8.3 5G, on the other hand, is the first 5G Nokia smartphone. The Nokia 1.3, Nokia 5.3, and the Nokia 8.3 5G were originally due for launch at the Mobile World Congress (MWC) in Barcelona last month, though since organiser GSMA cancelled the trade show in response to the coronavirus outbreak, the Finnish company ultimately hosted the launch through an online-only event. The launch also saw the debut of the Nokia 5310 feature phone and a pay-as-you-go global data roaming service called HMD Connect.

Details about the India launch dates and prices of the new Nokia phones are yet to be announced. 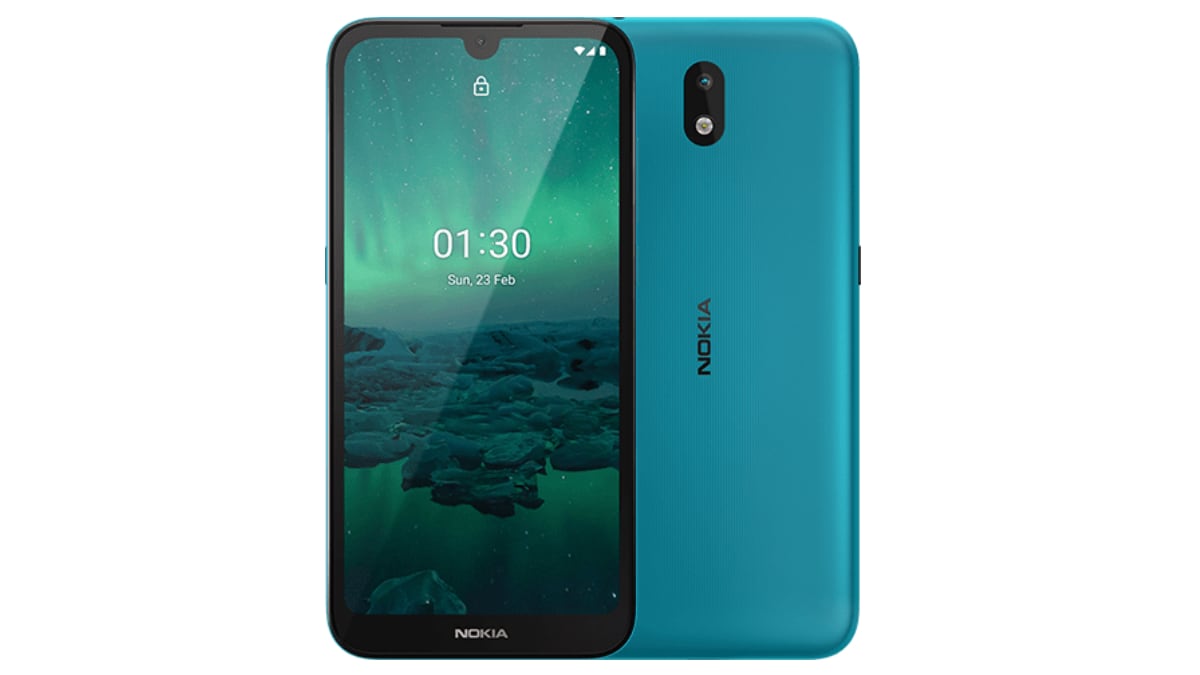 In terms of display, the Nokia 1.3 has a 5.71-inch HD+ (720x1520 pixels) display with 19:9 aspect ratio, waterdrop-style display notch, and up to 400 nits of brightness. The phone is powered by a quad-core Qualcomm 215 SoC, along with 1GB of LPDDR3 RAM. There is a single, 8-megapixel camera sensor at the back, paired with an LED flash and an autofocus lens, and a 5-megapixel selfie camera sensor at the front. Furthermore, the company has pre-installed Google Go Camera app along with artificial intelligence (AI) backed Low Light enhancement, HDR, and Portrait modes.

The Nokia 1.3 comes with 16GB of eMMC 5.1 storage that is expandable via microSD card (up to 400GB). Connectivity options include 4G LTE, Wi-Fi 802.11 b/g/n, Bluetooth v4.2, GPS/ A-GPS, Micro-USB, FM radio, and a 3.5mm headphone jack. Sensors on board include an accelerometer, ambient light, and a proximity sensor. The smartphone also comes with a dedicated Google Assistant button.

The dual-SIM (Nano) Nokia 5.3 runs Android 10 and is upgradable to Android 11 as well as its next version. The phone has a 6.55-inch HD+ (720x1600 pixels) in-cell display that has 20:9 aspect ratio and is protected by a 2.5D Corning Gorilla Glass 3 panel. Under the hood, the phone comes with an octa-core Qualcomm Snapdragon 665 SoC, coupled with 3GB, 4GB, and 6GB of LPDDR4x RAM. There is a quad rear camera setup that comprises a 13-megapixel primary sensor along with an f/1.8 lens and a 5-megapixel secondary sensor with an ultra-wide-angle 118-degree lens. The camera setup also has a 2-megapixel depth sensor and a 2-megapixel macro shooter. Further, it is paired with an LED flash. The Nokia 5.3 also has an 8-megapixel selfie camera at the front along with an f/2.0 lens. 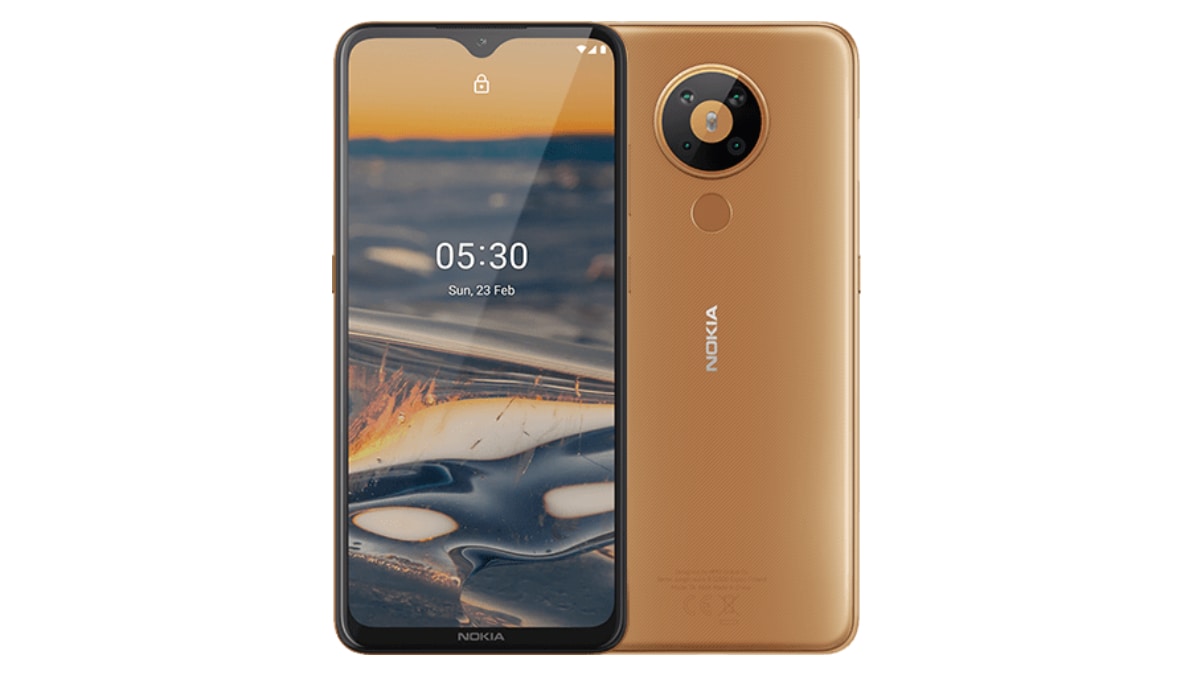 In terms of storage, the Nokia 5.3 has 64GB and 128GB of eMMC 5.1 storage options that both are expandable via microSD card (up to 512GB) through a dedicated slot. Connectivity options include 4G LTE, Wi-Fi 802.11 b/g/n/ac, Bluetooth v4.2, GPS/ A-GPS, USB Type-C, FM radio, and a 3.5mm headphone jack. Sensors on board include an accelerometer, ambient light, and a proximity sensor. There is also a fingerprint sensor at the back. Additionally, the phone includes a Google Assistant button for quickly accessing the digital assistant.

The dual-SIM (Nano) Nokia 8.3 5G runs Android 10 and is ready for Android 11 and its next iteration. It features a 6.81-inch full-HD+ (1080x2400 pixels) PureDisplay panel with a 20:9 aspect ratio and a hole-punch design. Under the hood, the phone has an octa-core Qualcomm Snapdragon 765G SoC, paired with 6GB and 8GB of RAM. There is a quad rear camera setup that has a 64-megapixel primary sensor along with an f/1.89 lens that is backed by Zeiss Optics, along with a 12-megapixel secondary sensor along with an f/2.2 ultra-wide-angle lens that has a field-of-view (FoV) of 120 degrees. The camera setup also includes a 2-megapixel depth sensor and a 2-megapixel macro shooter as well as has a dual-LED flash module. The phone also includes a 24-megapixel selfie camera that has an f/2.0 lens powered by Zeiss Optics.

For storage, the Nokia 8.3 has 64GB and 128GB of onboard storage that both are expandable via microSD card (up to 400GB). Connectivity options include 5G, 4G LTE, Wi-Fi 802.11 a/b/g/n/ac, Bluetooth v5.0, GPS/ A-GPS, NFC, USB Type-C, FM radio, and a 3.5mm headphone jack. Sensors on board include an accelerometer, ambient light, magnetometer, and a proximity sensor. The phone also has a side-mounted fingerprint sensor as well as a dedicated Google Assistant button.