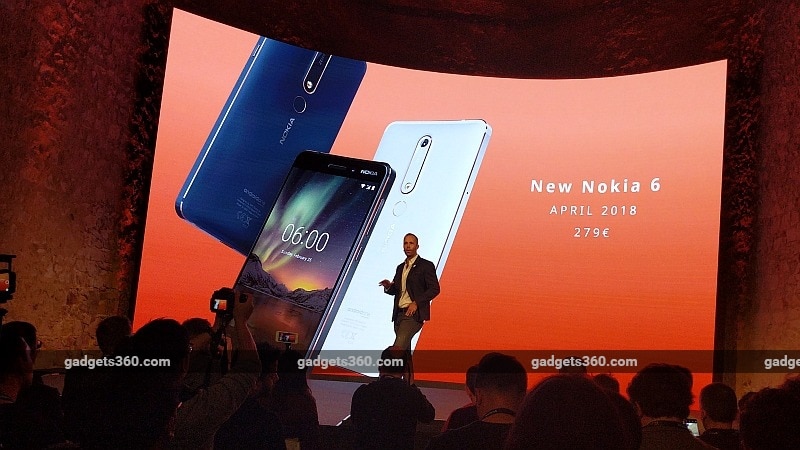 Nokia 6 (2018) was launched by HMD Global at the Nokia Mobile launch event ahead of MWC 2018. The smartphone was unveiled earlier this year for China, and this is the global launch of the same device. However, the global variant is an Android One smartphone, which also happens to be the biggest highlight of Nokia 6 (2018). The smartphone bears the company’s Bothie feature, another highlight, while the fingerprint sensor has been moved to the rear panel – instead of below the display. Nokia 6 (2018) is built out of a single block of anodised 6000 series aluminium.

The Nokia 6 (2018) price has been set starting EUR 279 (roughly Rs. 22,200), without taxes and subsidies, what HMD Global is calling the global average retail price. The Nokia 6 (2018) price in India has not been announced yet. The smartphone will be launched in three colour variants - Black/ Copper, White/ Iron and Blue/ Gold – and will go sale from early April in two variants - 3GB RAM/ 32GB storage and 4GB RAM/ 64GB storage.

Nokia 7 Plus Android One Smartphone With Dual Rear Cameras Announced

The Nokia 6 (2018) will be available in single-SIM and dual-SIM variants, depending on the region. It runs Android 8.0 Oreo, and as we mentioned, the smartphone is an Android One offering, with the promise of stock Android and swift updates. The smartphone sports a 5.5-inch full-HD (1080x1920 pixels) IPS display complete with Gorilla Glass 5, and is powered by the octa-core Qualcomm Snapdragon 630 SoC, with 3GB or 4GB of LPDDR4 RAM.