The phone will bring some major upgrades over the Nokia 5.1.

HMD Global is reportedly gearing up to launch a new Nokia phone packing a 48-megapixel rear camera. Alleged images of a Nokia-branded phone with triple rear cameras encased in a circular module have surfaced online. Codenamed ‘Daredevil', the leaked images show the phone with a glossy finish on the rear panel and a physical fingerprint sensor, while the display is shown flaunting a waterdrop notch. The upcoming Nokia-branded phone is tipped to pack a 48-megapixel primary camera as well as a wide angle camera. The phone will reportedly be powered by the Snapdragon 660 SoC and might be launched as the Nokia 5.2 in the market.

The alleged images of the Nokia Daredevil were spotted on Baidu and they show a Nokia phone clad in black with a circular module on the back. A triple rear camera set-up can be seen in the leaked images, while a fingerprint sensor sits below it. On the front, a waterdrop notch can be seen at the top, while the software looks to be stock Android.

An image depicting EXIF data of a photo clicked by the phone suggests that the Nokia Daredevil will pack a 48-megapixel sensor with an f/1.8 aperture. The name of the phone is also shown to be HMD Global Daredevil. Another set of images show that the phone will be powered by the Snapdragon 660 SoC, while its display will have a resolution of 1080x2340 pixels with a pixel density of 410 pixels per inch. 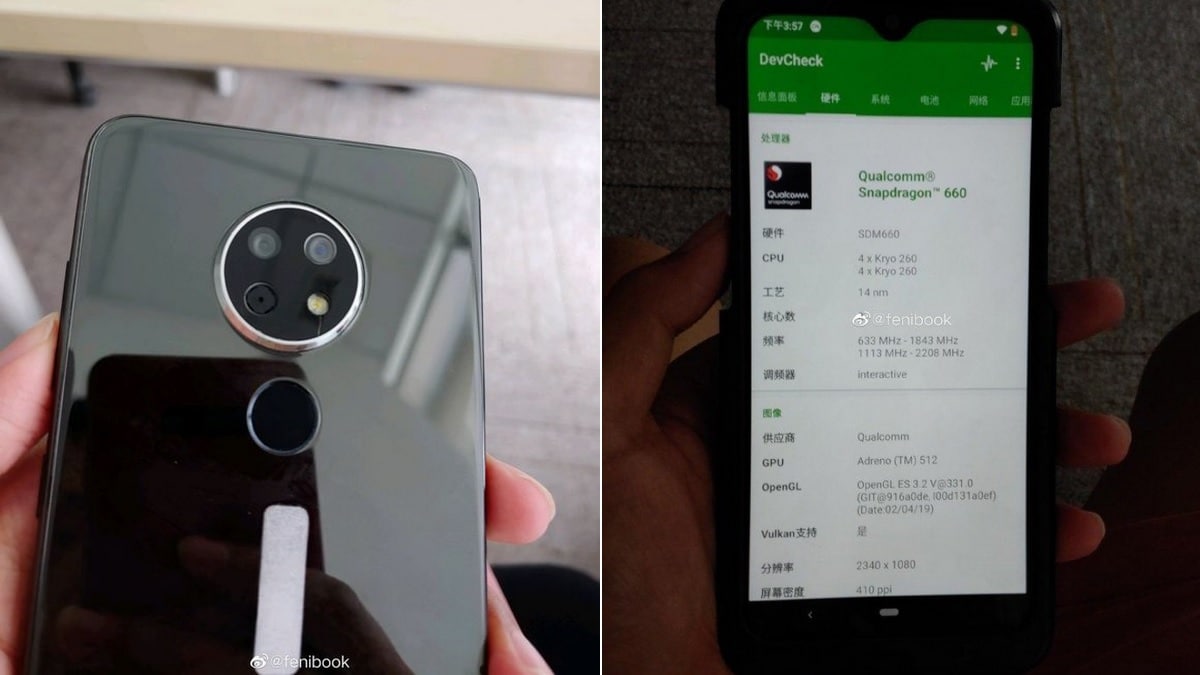 The phone will reportedly come equipped with a 3,500mAh battery, but there is no word on support for fast charging. The camera UI shows a wide-angle option, which means one of the three rear cameras, is a wide-angle sensor.

Additionally, a tweet from Nokia anew regarding the leak states that the Nokia Daredevil might be launched as the Nokia 5.2 in the market, but there is no word as to when that will happen. Another tweet suggests that the Nokia 5.2 might come equipped with Zeiss optics, PureDisplay screen technology, and OZO audio feature that brings spatial audio with 3D recording and playback capabilities.

Further reading: Nokia Daredevil, Nokia 5.2, HMD Global, Zeiss Camera
Nadeem Sarwar Email Nadeem Aside from dreaming about technology, Nadeem likes to get bamboozled by history and ponder about his avatars in alternate dimensions. More
HTC U11+ Android 9.0 Pie Update Reportedly Starts Rolling Out, Beginning in Taiwan
Google Denies Talking to Dish to Create Fourth Telecom Carrier in the US