Nokia 5.1 Plus is the global variant of the Nokia X5

Nokia 5.1 Plus was globally unveiled on Tuesday, at an event in New Delhi. Alongside, the company launched the Nokia 6.1 Plus in India as well. Both smartphones are originally part of HMD Global's new generation of smartphones that feature a new all-screen design philosophy and incorporate a display notch. The Nokia 5.1 Plus is in fact the global variant of the Nokia X5, which was launched in China in July. Highlights of the Nokia 5.1 Plus include its dual rear camera setup. As with other Nokia handsets in global regions, the smartphone is part of the Android One initiative, implying that it runs a Google-certified optimised version of stock Android and is promised to receive timely version updates.

The Nokia 5.1 Plus price in India was not revealed at the event, however, the company did provide a global pricing of EUR 199 (roughly Rs. 15,900) excluding taxes and subsidies. It will go on sale in India in September, the company added, saying that it will be made available via Flipkart and the Nokia online store. It will be made available in Gloss Black, Gloss White, and Midnight Gloss Blue colour variants.

The dual-SIM (Nano) Nokia 5.1 Plus runs stock Android 8.1 Oreo, and sports a 5.86-inch HD+ (720x1520 pixels) display with 2.5D curved glass. It is powered by a MediaTek Helio P60 SoC (four Cortex-A73 cores clocked at 1.8GHz and four Cortex-A53 cores clocked at 1.8GHz) coupled with 3GB of RAM. The smartphone bears a dual rear camera setup with a 13-megapixel primary sensor coupled with an f/2.0 aperture and PDAF autofocus, apart from a 5-megapixel depth sensor. The rear setup is accompanied by an LED-flash module. On the front, the smartphone sports an 8-megapixel camera coupled with an f/2.2 aperture and 80.4-degree wide-angle lens. 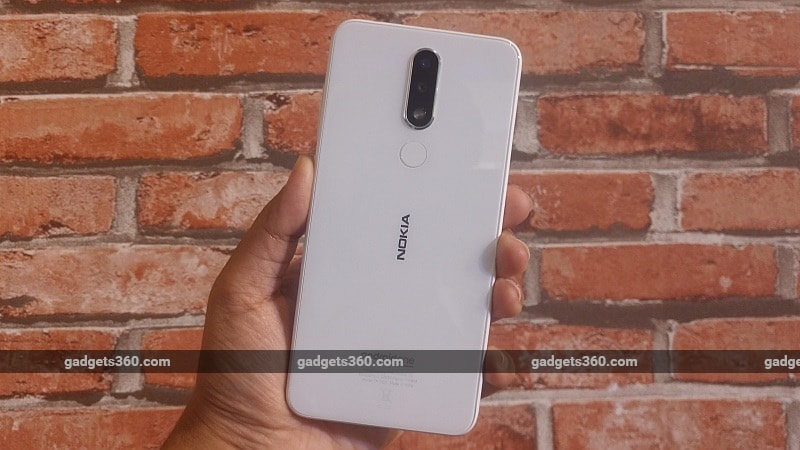 Nokia 5.1 Plus, seen from behind

The Nokia 5.1 Plus comes with 32GB of inbuilt storage that's expandable via microSD card (up to 400GB). Connectivity options include 4G VoLTE, Wi-Fi 802.11ac, Bluetooth v4.2, GPS/ A-GPS, USB Type-C (v2.0), and a 3.5mm headphone jack. Sensors on board include an accelerometer, ambient light sensor, gyroscope, and proximity sensor. It sports a fingerprint sensor on the rear panel. The smartphone is powered by a 3060mAh battery.