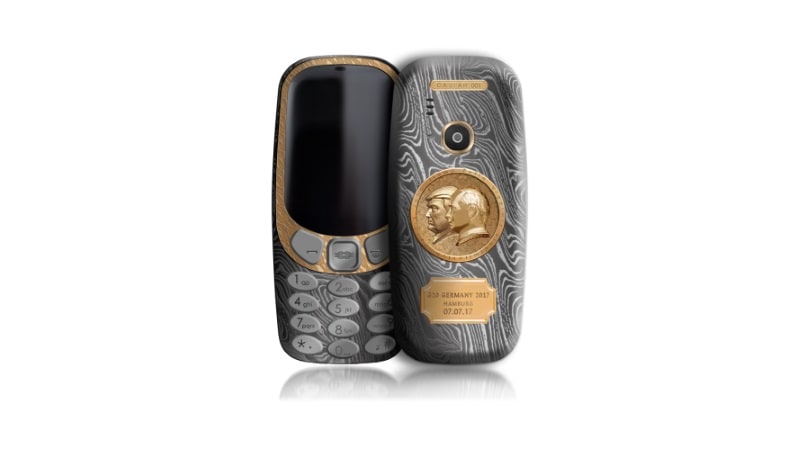 Nokia 3310 (2017) has been one of the most popular phones that came out this year and it seems like the feature phone has now received a luxury treatment as well. The 'Putin-Trump Summit' edition of the revamped Nokia 3310, which has been created in honour of the meeting between the president of the US and Russia at G20 international forum, is now available for purchase at a premium price of around $2,468 (roughly Rs. 1.6 lakhs).

The Nokia 3310 Putin-Trump Summit edition has been created by Russian phone customiser Caviar and comes with all the standard features offered by the regular variant but has a luxurious leather casing that has stripes of 'Black Velvet', as pointed out in a report by Neowin. With its name, it would obviously be a shame if the phone did not come with a gold plated circular emblem with Donald Trump and Vladimir Putin in it, and the phone doesn't disappoint.

The case is made up of tempered titanium of VT-23 grade and the coating is a damask steel pattern. If you are thinking that there hasn't been much thought put into the product, you are wrong. Caviar says that the emblem shows both Donald Trump and Putin looking in the same direction, which shows the common desire for progress in Russian-American relations from both the world leaders.

While Caviar is also offering an iPhone 7 and iPhone 7 Plus in a Putin-Trump Summit edition as well but users will have to pay additional price for the smartphone in comparison with Nokia 3310 (2017). If you have enough money to purchase a feature phone for this price, you might want to purchase the phone before it goes out of stock.