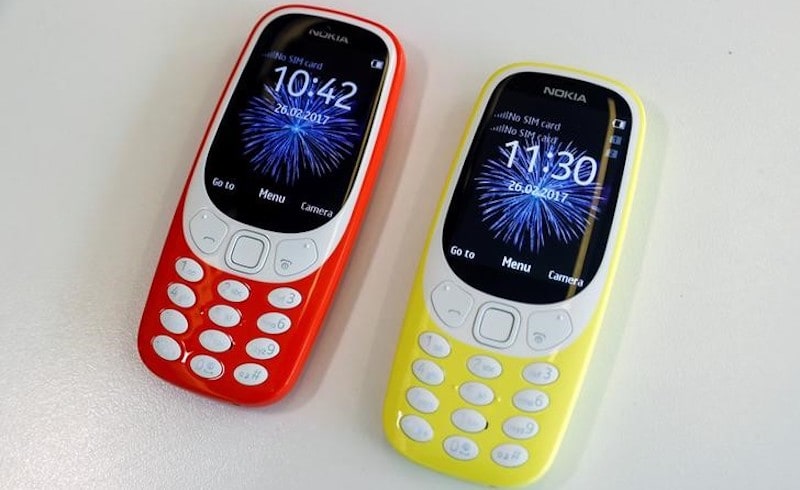 Nokia relaunched its simple but classic 3310 phone in its home market of Finland on Wednesday, hoping a wave of nostalgia may boost the brand as it expands into newer smartphones.

Once the world's dominant phonemaker, Nokia Oyj sold its handset operations to Microsoft in 2014, leaving it to focus on telecom network equipment.

But its brand has gone back on the mobile market across much of Europe and India thanks to a licensing deal with HMD Global, a new company led by former Nokia executives and backed by Chinese electronics giant Foxconn.

HMD has sole use of the Nokia brand on all phones and tablets for the next decade, and it will pay royalties to Nokia Oyj.

Nokia 3310, a basic talk and text phone, was the world's most popular device in 2000 and the first handset owned by many smartphone users of today.

The updated version, in bright red or yellow or more modest blue or grey and featuring the classic Snake game, sells for EUR 49 ($52).

HMD hopes that its 22 hours of talk time and up to one month of standby time will heighten its appeal for customers looking for a break from smartphone overload or a reliable device for lively nights out.

Initial demand appears to be strong.

"The first delivery was fully pre-ordered and we'll probably need to wait couple of weeks before we have 3310 widely available in our stores," said Jan Virkki, head of consumer products at Finland's largest telecom operator Elisa.

The nostalgic appeal was clear.

"It looks like the brick, like the ones we had when we were kids," said student Oona Patomaki, walking by Elisa's store in downtown Helsinki.

While operators and retailers in other countries - including Britain's Carphone Warehouse - have echoed Elisa's message, the precise level of consumer appetite is difficult to estimate as HMD did not give any sales figures.

"In the UK, initial sales have been very strong, and that's a pretty good achievement because this is a very basic phone, it doesn't even have Wi-Fi on it," said Ben Wood, analyst at CCS Insight.

Three new Nokia smartphones running on Google's Android platform are due to go on sale in upcoming weeks and the hope is that the Nokia 3310 will whet appetites.

"The mid-range Android smartphone space is probably the toughest of the mobile phone markets in existence... This is their challenge, and HMD needs to quickly move the market forward," said Wood.

"New Nokia 3310s, at least, mean that consumers are now aware that Nokia is back."