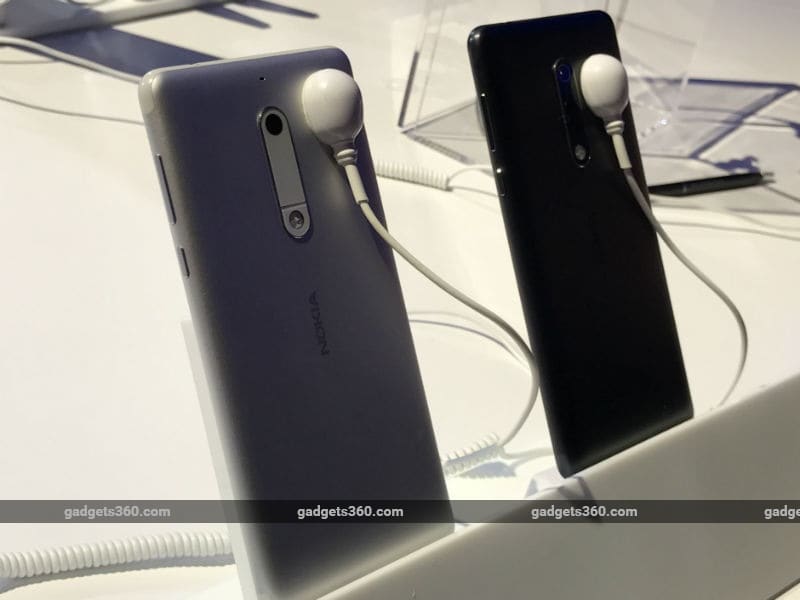 Nokia 3 and Nokia 5 Android phones were launched by Nokia brand partner HMD Global at the company's Sunday launch event at MWC 2017 in Barcelona. Alongside the two new Nokia Android phones, the company also announced the global availability of the Nokia 6, which was launched in China last month. The company also unveiled the iconic Nokia 3310 (2017) feature phone at the same event.

While the Nokia 3 runs Android 7.0 Nougat, the Nokia 5 smartphones runs Android 7.1.1 Nougat out-of-the-box. The company at the launch event stressed that all the new Nokia smartphones running Android will get regular updates. Much like other Nougat powered smartphones, the Nokia 3 and Nokia 5 will come with unlimited cloud storage on Google Photos app. Both will be available as a single SIM and dual SIM variants though availability could be different depending on the markets

The Nokia 3 will sport a polycarbonate body, machined aluminium frame, and will come with Corning Gorilla Glass lamination on top. It will be available in Silver White, Matte Black, Tempered Blue, and Copper White colour variants. It sports a 5-inch HD (720x1280 pixels) IPS display. It is powered by a quad-core MediaTek MT6737 processor clocked at 1.3GHz coupled with 2GB of RAM. It comes with 16GB storage and supports expandable storage via microSD card (up to 128GB). The Nokia 3 sports 8-megapixel front and rear camera. Both the cameras come with autofocus. The company adds that the Nokia 3 sports display flash.

The Nokia 5, on the other hand, features a fingerprint sensor embedded on the home button. HMD Global touts “seamless” metal body. Similar to the Nokia 3, the Nokia 5 will be available as both single SIM and dual-SIM variants though availability will depend on the market. The Nokia 5 is also expected to receive regular updates from the company.

The Nokia 5 is powered by a Qualcomm Snapdragon 430 processor coupled with 2GB of RAM. The handset comes with 16GB inbuilt storage and supports expandable storage via microSD card (up to 128GB). The Nokia 5.2-inch IPS LCD (720x1280 pixels) IPS LCD display and comes with 2.5D Corning Gorilla Glass cover on top.

It sports a 13-megapixel rear camera with PDAF and dual tone flash. It also packs an 8-megapixel camera with autofocus and comes with 84-degress field of view lens. The handset will be available in Tempered Blue, Silver, Matte Black, and Copper colours. It measures 149.7x72.5x8.05mm and supports LTE Cat. 4 download speeds. The handset is backed by a 3000mAh non-removable battery.