Nokia 3.2 has passed Wi-Fi Certification ahead of its MWC 2019 launch

Nokia 3.2 is anticipated to launch at MWC 2019, and now a fresh leak tips the arrival of the Nokia 3.2 again. Nokia has been working on a new smartphone with model number TA-1157 for some time now. Based on specifications and model number, this appears to be the successor to the Nokia 3.1, and may be called the Nokia 3.2. Like other Nokia smartphones, this is also expected to be a part of Google's Android One programme. Since its last visit to the US FCC it revealed key specifications and schematics of the upcoming smartphone. We already know that the Nokia TA-1157 has a vertical dual camera setup at the back. It also has a single LED flash under the camera module and the design language is similar to some of the other Nokia smartphones. Now, it has been certified by the Wi-Fi Alliance, revealing a few more details.

From the last FCC website listing we know that the smartphone measures 148.95mm in length and 71.33mm in width. This smartphone has now passed Wi-Fi certification by the Wi-Fi Alliance. The alleged Nokia 3.2 has been certified for Wi-Fi 802.11 b/g/n as well as Wi-Fi Direct. The Wi-Fi certification listing also hints to Android 9 Pie being pre-installed on this smartphone. The listing was first spotted by Nokiapoweruser. 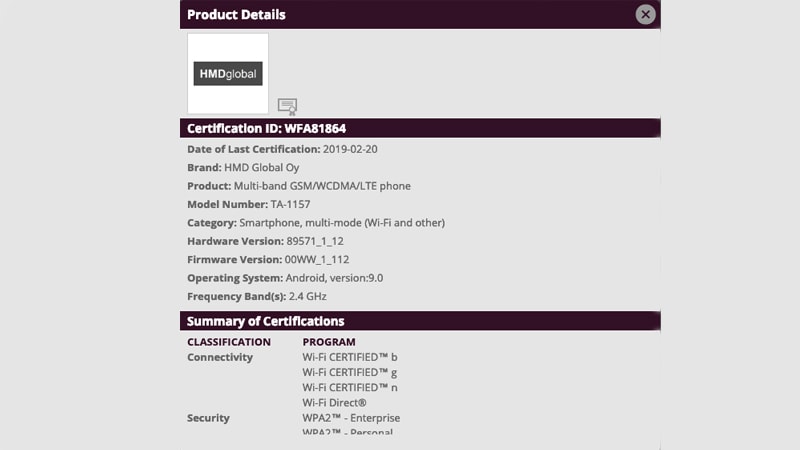 Based on the specifications revealed by the US FCC filing, the device will also support Bluetooth 4.2 as well as LTE bands 1,3,5,7,8,20,28,38,40 and 41. The listing had also revealed the presence of an NFC antenna at the back around the camera module.

Other things we already know is that the base variant of this model will have 2GB of RAM and 16GB of storage and the higher variant will have 3GB RAM and 32GB of storage. It could have expandable storage via a microSD card slot but the details are unknown at the moment.

The alleged Nokia 3.2 is expected to have a 3,000mAh battery based on the specifications we could gather about this smartphone. Like we've said before, the specifications and the model number make it a possible successor to the Nokia 3.1. But we might have to wait for the product to break cover which could happen at MWC 2019. A recent leak also tipped HMD Global would be unveiling the smartphone at MWC, alongside the Nokia 9 PureView, Nokia 4.2, and Nokia 1 Plus.

Further reading: Nokia 3.2, Nokia, MWC 2019
Aditya Shenoy Email Aditya Aditya Shenoy writes reviews smartphones, wearables, headphones and speakers for Gadgets 360, out of Mumbai. Aditya is a reviewer for Gadgets 360 and has written extensively about smartphones, software updates, and upcoming devices. Aditya is available on Twitter at @adishenoy, and you can mail him at adityashenoy@ndtv.com, so please send in your leads and tips. More
Nintendo Switch to Get Xbox Game Pass, Xbox One Games: Report
Samsung Galaxy S10e vs iPhone XR: Price, Specifications Compared