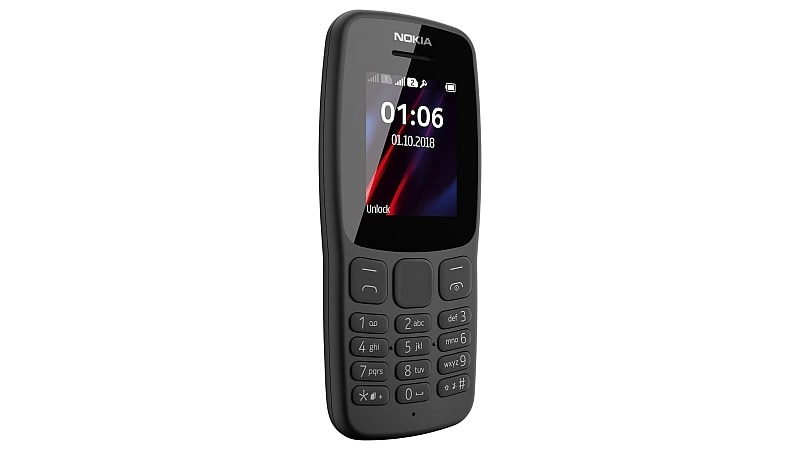 HMD Global has bolstered its presence in the feature phone market by launching the Nokia 106 (2018). The new phone comes as a successor to the original Nokia 106 that was unveiled globally in August 2013. It comes with a tough polycarbonate build that has "inherent colouring" that makes the colours run through the material. Also, there is a contoured design that makes the new Nokia 106 much more ergonomic than its predecessor. The latest Nokia phone is also touted to deliver up to 21 days of standby time or 15 hours of talk time on a single charge.

Nokia 106 (2018) price in Russia is set at RUB 1,590 (roughly Rs. 1,700). The phone comes in Dark Grey colour option and will go on sale in the country later this month. Details about the price and availability of the new Nokia 106 in global markets, including India, are yet to be revealed.

The Nokia 6 (2018) comes preloaded with try-and-buy games such as Nitro Racing, Danger Dash, and Tetris among others. It also has the ever-green, classic Snake Xenzia. Further, Nokia claims that the phone is capable of holding up to 2,000 contacts and 500 text messages.

Nokia 106 seen from the front and back

Alongside the Nokia 106 (2018), HMD Global has brought new Light Grey and Dark Blue colour variants of the Nokia 230 that debuted in Black and Silver colour options back in 2015.

The original Nokia 106 sported a 1.8-inch QVGA display with 160x128 pixels resolution, and could store up to 500 contacts. It features an 800mAh battery that the company claimed could deliver up to 10 hours of talk time and 840 hours of standby time. Other features included FM radio, 3.5mm audio jack, digital clock, calculator, flashlight, calendar, speaking clock, alarm clock, and reminder. The original Nokia 106 weighed around 74.2 grams and had dimensions of 112.9x47.5x14.9mm.