After the launch of the Nokia 8.1 last month, HMD Global launched the Nokia 106 (2018) feature in India. The phone is up for sale via offline retailers, as well as on the official website. The feature phone is yet another addition to the company's growing portfolio in the segment. To recall, HMD Global launched the Nokia 8110 4G Banana phone in October last year. The Nokia 106 (2018) is touted to deliver up to 21 days of standby time or 15 hours of talk time on a single charge.

HMD Global has announced that the Nokia 106 (2018) price in India is set at Rs. 1,299 (best buy price), and is available to buy from offline stores in the country, as well as via official website - though at the time of writing, the company appears to only be taking registrations for notification when it goes on sale. It is available in a Dark Grey colour variant. 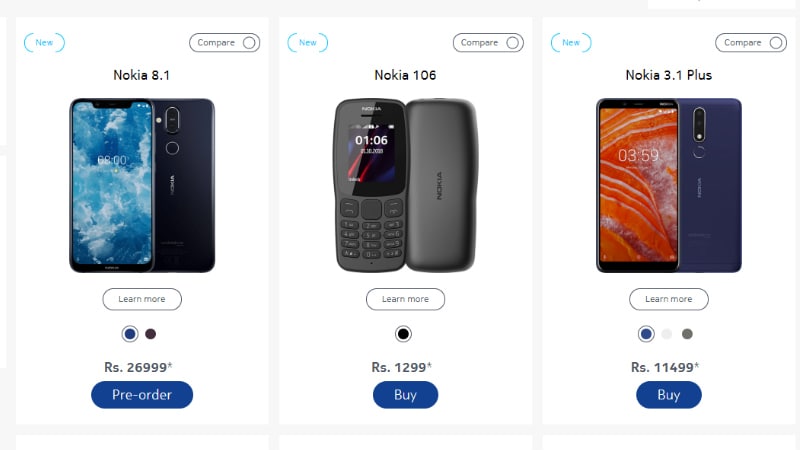 It comes with a tough polycarbonate build that has "inherent colouring" that makes the colours run through the material. Also, there is a contoured design that makes the new Nokia 106 much more ergonomic than its predecessor. The latest Nokia phone is also touted to deliver up to 21 days of standby time or 15 hours of talk time on a single charge. As seen in the image above, it sports an island keymat as well.

The Nokia 6 (2018) comes preloaded with try-and-buy games such as Nitro Racing, Danger Dash, and Tetris among others. It also has the ever-green, classic Snake Xenzia. Further, Nokia claims that the phone is capable of holding up to 2,000 contacts and 500 text messages.