HMD Global had announced the Nokia 1 at the Mobile World Congress in Barcelona in February this year. The company's first smartphone running Android 8.1 Oreo (Go edition), went on sale in India last month. The update brings the April 5 security update to the Nokia 1, as well as improved system stability, but nothing else was mentioned in the changelog. Notably, the update is 142.6MB in size and is available as an OTA (over-the-air) release. You can check its availability by going to Settings > About phone > Software updates. 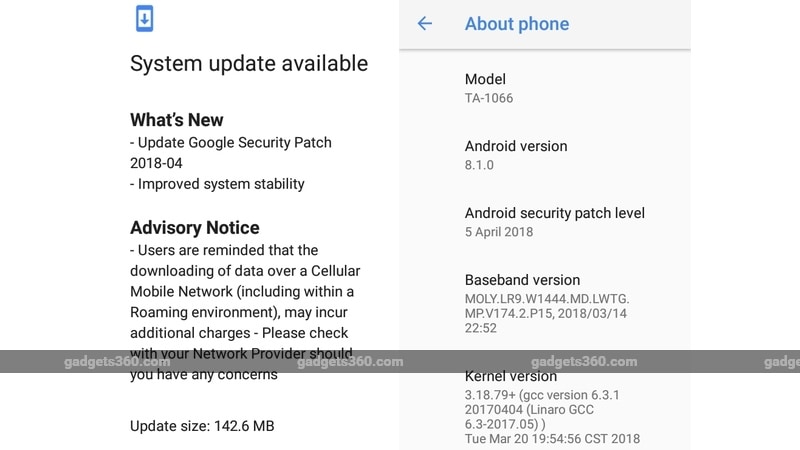 Google's April Android security update comes in two security patch levels, and they address various system-level vulnerabilities, ranging from high to critical. As per the Android Security Bulletin for the month of April, the most severe of the issues spotted by the Android team is a critical security vulnerability in media framework that could let a remote attacker silently execute arbitrary code using a "specially crafted file".

To recall the specifications, the dual-SIM (Nano) Nokia 1 sports a 4.5-inch IPS display and is powered by a 1.1GHz quad-core MediaTek MT6737M processor coupled with 1GB of RAM. It features a 5-megapixel camera at the back with a fixed focus lens and an LED flash. On the front, the handset has a 2-megapixel fixed focus camera. Onboard the Nokia 1, is 8GB of inbuilt storage, expandable via microSD card (up to 128GB). Also, the 2150mAh battery on board is rated to deliver up to 9 hours of talk time and up to 15 days of standby time. In India, the Nokia 1 has been priced at Rs. 5,499.