'No Plans' to Update LG G3 to Android 5.1 Lollipop

LG this year has launched a number of Android 5.0 Lollipop handsets in the market. The firm till recently had not mentioned anything about whether its handsets, including the flagship G4, would get the recently announced Android M. However, the company now indicates that last year's flagship, the LG G3, will not receive Android 5.1 Lollipop at all.

According to LG Hellas, in a reply to a comment on Facebook, the South Korean firm currently has no plans to roll out Android 5.1 or Android 5.1.1 Lollipop to its LG G3 smartphone. This could also mean that that smartphone might be directly jumping to Android M.

Skipping updates is nothing new for LG as the firm has previously too rolled out the Android 5.0 Lollipop update to its G3 directly from Android 4.4.2 KitKat. 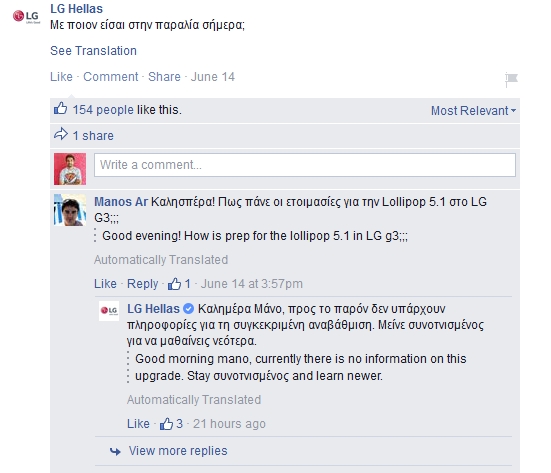 'No Plans' to Update LG G3 to Android 5.1 Lollipop
Comment