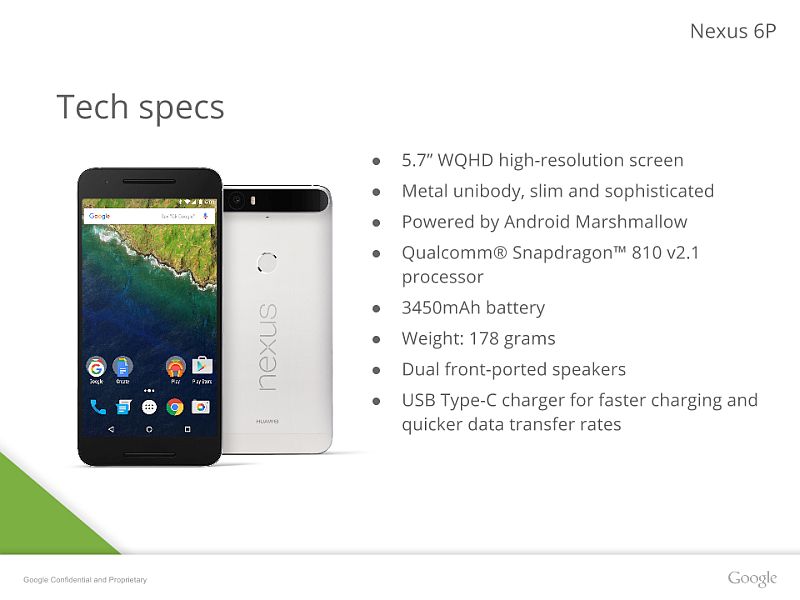 We are just one day away from Google's conference on Tuesday in San Francisco, where the company is anticipated to showcase its new Nexus hardware - the LG Nexus 5X and Huawei Nexus 6P - alongside an all-new Chromecast dongle.

Ahead of Google's Tuesday event, a presentation slide leak has made it to the Internet confirming 'almost' everything about the new Huawei Nexus 6P. The leaked slides show in-depth details about the new Nexus 6P including how the Huawei-made Nexus is the first all-metal Nexus smartphone, corroborating an earlier report that claimed one of the Nexus smartphones will feature a metal build.

It sports a Corning Gorilla Glass 4 for protection from scratches on screen. One slide showed three highlights for the Nexus 6P smartphone including sleek design, it being fast and powerful, apart from the 5.7-inch screen.

One of the leaked slides for the tech specifications of the Nexus 6P gives away the entire innards including 5.7-inch QHD display; Android 6.0 Marshmallow; Qualcomm Snapdragon 810 (v2.1); 3450mAh battery; 178-gram weight; dual front-ported speakers, and USB Type-C support, all in line with previous leaks. Another slide details features on Nexus camera including low-light images, and an improved Google Camera app.

The leaked Nexus 6P presentation slides were posted on Imgur, an online image sharing community, and first picked up by Android Police.

In another leak, the LG Nexus 5X appears to have passed through the US FCC or Federal Communications Commission. The handset (via Android Police), with model number LG H790, is said to be the US-specific model while the FCC listing also includes the LG H791, which was recently listed by Amazon India. According to the FCC, the Nexus 5X supports the following bands including GSM, WCDMA, CDMA, and LTE Band.