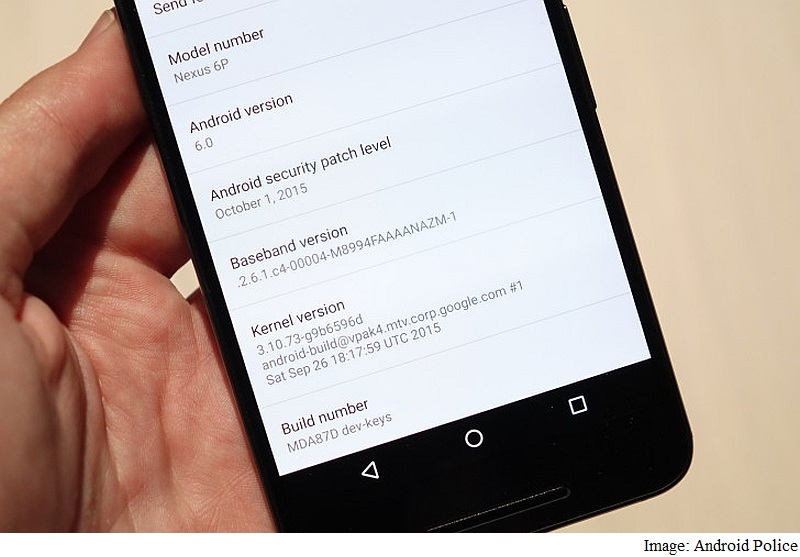 Google's latest smartphone offerings, the Nexus 5X and Nexus 6P, show users the 'Android security patch level' of the handsets. The new field can be seen in the About phone section in Settings, and will rollout to handsets running Android 6.0 Marshmallow.

The inclusion of this new field is arguably a step by Google to keep users updated about if their devices are running the latest security patch or not, which has become a monthly affair  ever since the Stagefright vulnerability.

Android Police first reported about this new inclusion, after having spent some time with the new Nexus 5X and Nexus 6P smartphones. The smartphones showed October 1, 2015, to be the latest security patch installed. The feature however will roll out with Android 6.0 Marshmallow to devices, though Android M Developer Preview builds did not sport the field.

Adrian Ludwig, lead security engineer for Android, spoke to The Verge about the new feature, saying, "It should make it really simple for users to understand the state of the device." Ludwig added the feature is part of Android's attempt at "making sure that security information and patch level information is available to users."

Features specific to the Nexus 5X and Nexus 6P unveiled by Google at the Tuesday event included the ability to uninstall certain pre-installed apps. The company also promised that the Nexus smartphones will come with the minimum amount of bloatware preloaded. Apps that users can uninstall include Google Docs, Fit, Google+, Keep, News, Play Books, Sheets, Slides, and Weather.

Google's Camera app for Nexus devices also features some exclusive features for the Nexus 5X and Nexus 6P, specifically, slow-motion video recording, and Smart Burst (only for the Nexus 6P).