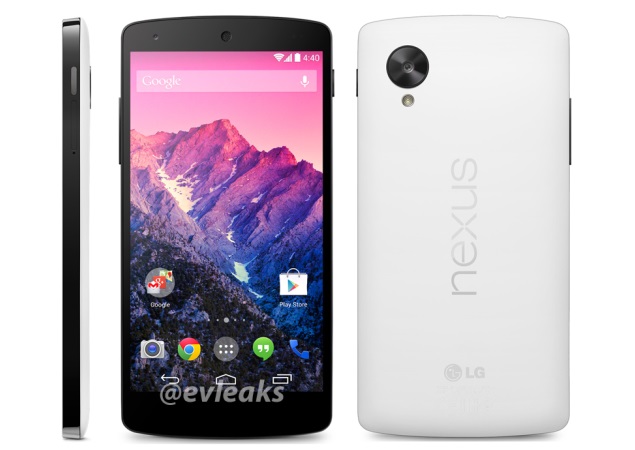 We have already seen a number of purported images of the upcoming Nexus 5 smartphone, but this time the infamous phone tipster, @evleaks has revealed the device in its alleged White colour variant. However, there is no word whether the leaked image is an official render, but smartphone it looks a lot like the device seen in leaks in the past, as well as the smartphone seen in the 'official' accidental listing of the $349 16GB Nexus 5 on the Google Play store. Importantly, the leak also indicates a November 1 launch date, though till now, no official event has been scheduled for the unveiling.

The tipster has posted the press render on Twitter and reveals a two-tone White colour variant with a black front panel and a white rear panel. Further, the render shows a homescreen which houses apps for camera, Chrome, hangout, dialer, Play Store and Google's Hub that houses usual Google apps like Gmail, Google Photos, Google+ among others. The tweet reads, "In white. 11/1.".

Rumoured specifications of the Nexus 5 include a 4.95-inch full-HD (1080p) IPS LCD display, Qualcomm Snapdragon 800 quad-core processor clocked at 2.3GHz, 2GB of RAM, 8-megapixel rear camera with OIS and a 1.3-megapixel front-facing camera. The alleged device has also been expected to include a host of sensors like ambient light, proximity, pressure as well as accelerometer, compass, notification LED and gyroscope.

It is expected that the next Nexus smartphone would run Android 4.4 KitKat, and that the smartphone would be the platform lead device for the operating system, with both due to be launched at the same event alongside next-generation Nexus 10 tablet.