The All New HTC One, or the HTC One 2014 smartphone, continues to stay in the spotlight ahead of its official launch on 25 March 2014. It has reportedly emerged in some new images, and also on a certification website that details key specifications.

As per a Tenaa (a Chinese wireless certification website) listing of the 'HTC M8t', the device runs Android 4.4.2 KitKat, features a 5-inch TFT capacitive touchscreen with full-HD (1080 x 1920 pixels) resolution.

The All New HTC One is seen to be powered by the latest Qualcomm Snapdragon 801 quad-core chipset clocked at 2.26GHz and paired with 2GB of RAM. The handset is also said to come with 4G LTE wireless network support.

The HTC One 2014's most appealing rumoured feature is said to be its dual rear cameras. The Tenaa listing of the HTC M8t shows a 16-megapixel rear camera. New reports indicate the upper and the lower rear camera modules boast of 4-megapixel and 16-meapixel sensors respectively. Phonearena reports the Taiwanese firm will stick with its 'UltraPixel' technology and use it in the handset's front-facing shooter.

The Tenaa listing revealed a maximum expandable storage capacity of 64GB for the HTC M8t, but no built-in storage. The HTC One 2014 is said to arrive in four colour variants - Black, Silver, Red and Gold. The smartphone measures 146 x 70.5 x 9.45mm and weighs 157 grams.

Additionally the HTC One 2014 in some images has been compared to other flagship smartphones in the market, in terms of its size and body design. The images coming from Nowhereelse website, reveal the HTC One 2014's body compared with Apple iPhone 5s, LG G2, Samsung Galaxy S4, Sony Xperia Z1 and Samsung Galaxy Note 3 (See Below). 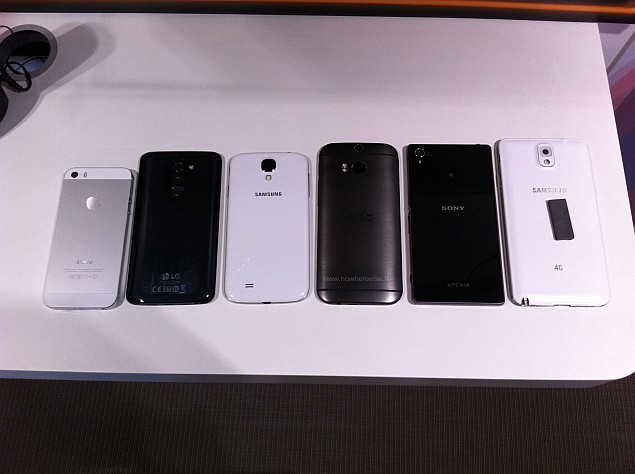