Motorola's much-leaked 'Shamu' handset that is rumoured to be Google's Nexus X (and not Nexus 6 as previously rumoured) was spotted on an Indian import/ export manifest site. In the meanwhile, the much-anticipated successor the Moto X (Review | Pictures) is also claimed to have leaked in an image.

The Indian import/ export site, Zauba, lists (via PhoneArena) two 'Shamu Phones (Prototype)' as shipped on August 20 with model number Motorola XT1112. The smartphones were shipped from the United States, and had a declared value of Rs. 34,982 each.

To be noted is that import/ export website price listings are only declared values, and usually are not accurate reflections of actual market price.

The much-leaked Motorola 'Shamu' handset, expected to hit the market as the Nexus X, is rumoured to launch on October 31. Notably, recent reports have indicated Google might launch two Nexus smartphones instead of one 5.9-inch Nexus X only. 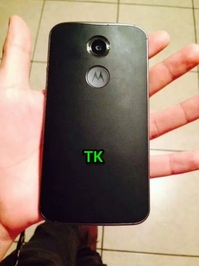 Meanwhile, the much-awaited successor to the Moto X, thought to be called the Moto X+1, has also been leaked in a live image flaunting a leather back in black colour and a grey Motorola logo, ahead of the expected official launch on September 4. Last week, the device had reportedly passed US FCC certification for AT&T and T-Mobile wireless carriers.

On Monday, TK Tech News posted new purported images of the Moto X+1, this time with a wooden back panel and the display turned on, revealing the icon for the Moto app. The website reported that the smartphone will feature an aluminium frame, and four sensors on the front panel that could either tie-in with the Moto and Moto Aware apps, or deliver a 3D interface.

Notably, the website also notes that the previously leaked Moto logo on the back panel of the smartphone is actually the power button, and also offers some gesture-based shortcuts. Finally, apart from wood, plastic, and leather, the website claims the Moto X+1 will ship with choice of denim as well as carbon fibre pack panels.In April, @evleaks had tipped the Moto X+1 smartphone to come in 25 colour options in five categories - Cool, Neutral, Warm, Wood and Leather. The added leather finish back option (not available for original Moto X), was tipped to also include Red, Blue, and Grey colours.So far, the rumoured specifications of the Moto X+1 include Android 4.4.4 KitKat; a 5.2-inch full-HD (1080x1920 pixels) display, a 2.4GHz quad-core Qualcomm Snapdragon 800 processor; an Adreno 330 GPU; 2GB of RAM; 16GB of built-in storage; a 12-megapixel rear camera, and a 2-megapixel front facing camera.
Comments