Motorola has sent out invites for an event on July 28, seemingly confirming recent reports that tipped the company would launch its new Moto G (Gen 3) and Moto X (Gen 3) smartphones on that date.

The Lenovo-owned company has sent out invites for an event in New Delhi (seen above), as well as events in London, New York, and Sao Paulo.

Motorola has also launched a micro-site for the event, which features this text, "Yes. We're in a relationship with our phone... We feel lost without it. We trust them with our most personal questions, photos, stories and secrets. They never leave our side. But shouldn't all that care and devotion you show be returned? A better mobile relationship is on its way. Join us on 7.28.15 to find out how we are changing things for the better." 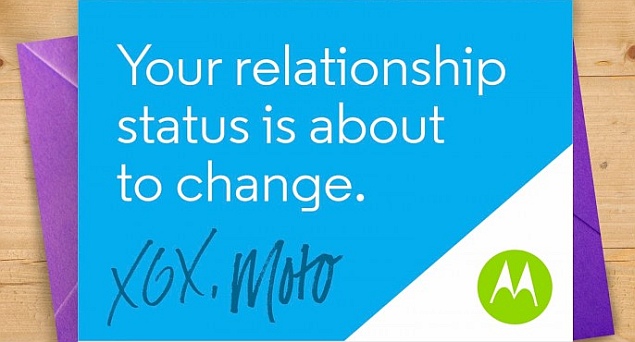 The India invite continues along the same relationship vein, saying, "A good friend will offer you their umbrella when it rains. A best friend will forever be ready to dance in the rain with you."

Reading between the lines, it seems obvious that Motorola is about to launch new mobile products that will change the relationship users have with their phones. Just how these tie in with the rumoured specifications leaked thus far for the Moto X (2015) and Moto G (2015) remains to be seen, with nothing so far tipping relationship building feature.
Comments

Turing Phone Claimed to Be Unhackable, Unbreakable, and Waterproof
Angry Birds 2 Announced, Will Release on July 30