Motorola reveals May 13 launch for 'made to last, priced for all' phone

After a flurry of rumours about the Moto G's successor, we now have official confirmation from Motorola that it's hosting a special event on May 13, where the company will announce a new budget smartphone.

Motorola has started sending invites for a May 13 event in London. The invite says the "next Motorola smartphone" will "connect more people to the world's information and each other," while also claiming that the upcoming smartphone is "made to last [and] priced for all."

The invite hints that the next Motorola smartphone can be a successor to the popular Moto G smartphone, with the stress on connectivity hinting at a budget LTE-capable smartphone. 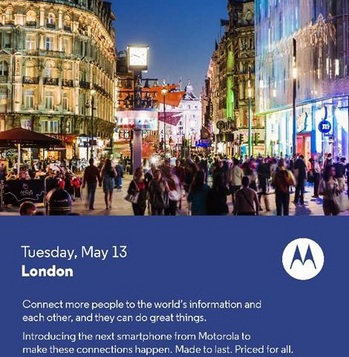 Further, a number of rumours have already suggested that after the company's success with the Moto G, it might introduce more variants of its budget smartphone. An earlier report, citing a Mexican publication, claimed that two new Moto G variants dubbed Moto G LTE and Moto G Ferrari are on cards. However, the report was silent on details of the Moto G variants, though it is clear from the name that Moto G LTE would be an LTE-enabled variant of the affordable Moto G (Review), which does not support LTE.

Notably, back in February, Motorola had also tipped that the next version of Moto X was scheduled to launch late in the US summer.

In addition, the company is expected to soon launch a successor to its popular mid-range Moto X handset. Phone tipster @evleaks has been on a roll leaking information about the next Moto X. First the name 'Moto X+1', and later a list of customisation colours of the alleged Moto X (Review) successor were leaked by the tipster.

Recently, another report indicated that Motorola might be prepping to launch a new handset codenamed Motorola XT912A, as its specifications surfaced online in a benchmark result listing, though the smartphone is also speculated to be the Moto X's successor.