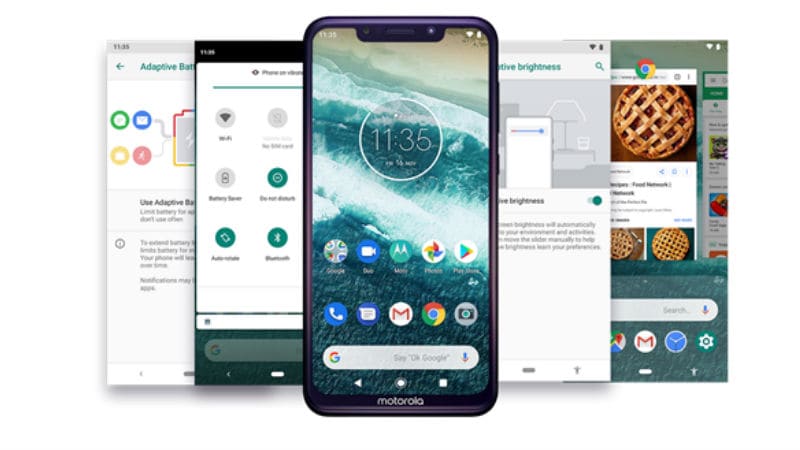 The Android 9 Pie update to Motorola One Power brings a new UI, improved battery life, and other features

Motorola, which has a strong record of releasing major updates to its smartphones, has started rolling out the Android 9.0 Pie update to the Motorola One Power. The latest Android build is being rolled out over-the-air (OTA) to Motorola One Power users in India. To recall, the affordable smartphone from the Lenovo-owned company was launched in the country back in September running Android 8.1 Oreo. It is worth noting that the Motorola One Power is a part of Google's Android One programme, meaning that it is aimed to offer timely software updates.

The Android 9.0 Pie update to Motorola One Power comes months after an Android Pie soak test programme was announced for the smartphone. The company had previously confirmed that Android Pie for the Motorola One Power would be rolled out sometime by the end of this year. A recent Geekbench listing had also hinted at the Motorola One Power running Android 9.0 Pie and now we have official confirmation coming straight from Motorola. The company says that the Android 9.0 Pie update brings a longer and improved battery life. The phone also gets a new user interface with redesigned Quick Settings and a revamped split-screen. Additionally, the latest Android update comes with gesture navigation, simplified volume controls, an improved Do Not Disturb mode, and an easier mechanism to manage notifications.

The Motorola One Power isn't the only Motorola smartphone that is receiving Android Pie. According to a recent report, some Moto X4 users in India have also received an Android Pie update in the form of a soak test. Meanwhile, Android Pie is yet to make way to premium Motorola handsets, such as the Moto Z3 and Moto Z3 Play.

First introduced in IFA 2018, the Motorola One Power was launched in India priced at Rs. 15,999; and it is available for purchase exclusively via Flipkart.

To recall some of the specifications, the dual-SIM smartphone sports a 6.2-inch full-HD+ LCD Max Vision display along with a 19:9 aspect ratio. The Motorola One Power is powered by an octa-core Qualcomm Snapdragon 636 processor, paired with an Adreno 509 GPU and 4GB of RAM. It comes with dual rear cameras including a 16-megapixel primary sensor and a 5-megapixel secondary sensor, with support for 4K video recording. At the front, there is a 12-megapixel sensor. The phone comes with 64GB of inbuilt storage, expandable via microSD card (up to 256GB). It is fuelled by a 5,000mAh battery with a 15W TurboPower fast-charger.