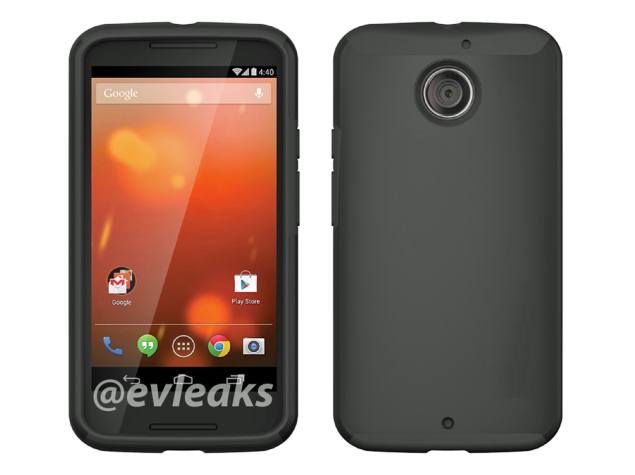 Various leaks surrounding the Moto X's successor have been around for a while now. Continuing with the trend, @evleaks on Monday tweeted an alleged render image of the much-rumoured Motorola Moto X+1 covered in a bumper case.

Front of the image posted by famous tipster, shows a similar design as seen on the Moto E (Review | Pictures), with two speaker grills (top and bottom) and the stock Android UI. The back of the alleged Moto X+1 device in the render image shows a camera without flash, although on the bumper there is one small hole visible above the camera, and a similar hole at the centre bottom of the image - there is no indication about the function of these gaps, or if it is just a design by the case maker.

Notably, this is one of the few times when a first time when any purported image suggesting the rumoured Moto X+1 design has been leaked. Previously a full-HD (1080x1920 pixel) screenshot was shared by a Motorola executive indicating something is in the pipeline.

While Motorola had confirmed back in February that the Moto X's successor is scheduled to launch late in the US summer, there have been few details that are doing rounds of the Internet.

Previous reports indicated all four major mobile carriers in the US: AT&T, Sprint, T-Mobile and Verizon, will carry the rumoured Moto X+1. The leak had once again come via serial tipster @evleaks in May, who also suggested that the Moto X successor is codenamed Victara.

@evleaks said, "Motorola Moto X+1 goes by codename Victara, and - no surprise here - is slated for sale by all four national carriers." The phone tipster has not revealed any details about the availability of the rumoured Moto X+1.

Earlier leaks have already suggested that the yet-to-be-announced Moto X+1, much like its predecessor, will come with customisation features, further corroborated by a Moto X+1 placeholder spotted on the Moto Maker Site.
Comments