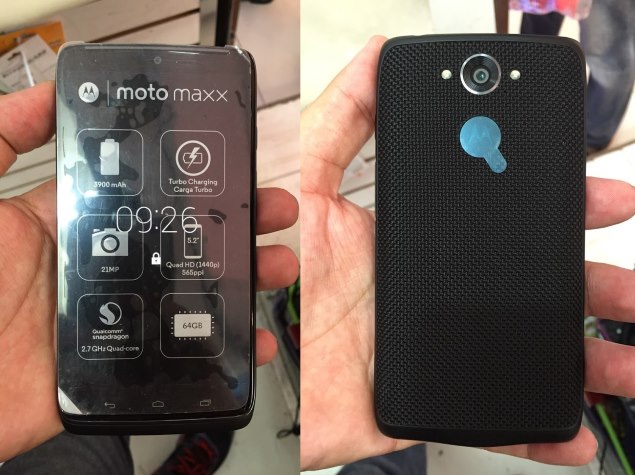 Motorola's Droid Turbo (exclusive to Verizon in the US) smartphone, which is anticipated to debut globally as Moto Maxx on Wednesday at an event in Sao Paulo, Brazil, has now been leaked in pictures.

The purported images of the Motorola-branded Moto Maxx were posted by a Google+ user (via Android Police) from Sao Paulo on Monday, but were later taken down. The post was captioned in Portuguese, which on translating to English reads, "Testing the monster."

The alleged 64GB variant of the Moto Maxx in pictures appears to be almost identical to the Droid Turbo, but without Verizon branding on the rear panel. Also, it seen to include identical specifications as the Droid Turbo, with a 5.2-inch Quad-HD (1440x2560 pixels) display offering a pixel density of 565ppi; a quad-core Qualcomm Snapdragon 805 processor clocked at 2.7GHz; 3GB of RAM; a 21-megapixel rear autofocus camera with f/2.0 aperture and dual-LED flash; a 3900mAh battery with turbo charging, and Android 4.4.4 KitKat.

Last week, a Portuguese publication had posted an invite from Motorola suggesting that the company is hosting an event on November 5 in Sao Paulo, Brazil, where it will unveil the unlocked global variant of the Motorola Droid Turbo as the Moto Maxx. The invite did not include a device name but was accompanied by an image featuring the unique Ballistic Nylon build of the Droid Turbo.

For those unaware, Brazil has been an important market for Motorola in the past, and the company globally unveiled the popular Moto G (first generation) last year at an event in Sao Paulo.
Comments