The Lenovo-owned company has in no time also revealed the India launch price of the 3G variant of the new Motorola Moto E to be Rs. 6,999, which will be same as the original Moto E price at launch last year. For those unaware, Motorola India recently permanently slashed the price of the Moto E to Rs. 5,999.

Motorola Mobility posted a YouTube video on Wednesday teasing the India launch price of the 3G variant. The company also confirmed that the second-generation Moto E will be available in India exclusively via Flipkart, similar to other Moto devices.

Unfortunately, the company has not revealed the price for the Motorola Moto E (Gen 2) 4G and also the release date for either handset. The price was first spotted by Android Advices.

One of the biggest highlights of the Moto E (Gen 2) will be Android 5.0 Lollipop, which will also make it the first handset from Motorola running the latest Android version out-of-the-box launched under Rs. 10,000.

Under the hood, the Moto E (Gen 2) is backed by a quad-core 1.2GHz Qualcomm Snapdragon 200 processor coupled with 1GB of RAM and Adreno 302 GPU. The company has finally upgraded the dual-core Snapdragon 200 SoC to quad-core. The Moto E (Gen 2) 4G is powered by a 64-bit quad-core 1.2GHz Qualcomm Snapdragon 410 SoC with Adreno 306. The new Moto E only supports single-SIM, unlike the dual-SIM first-generation Moto E. 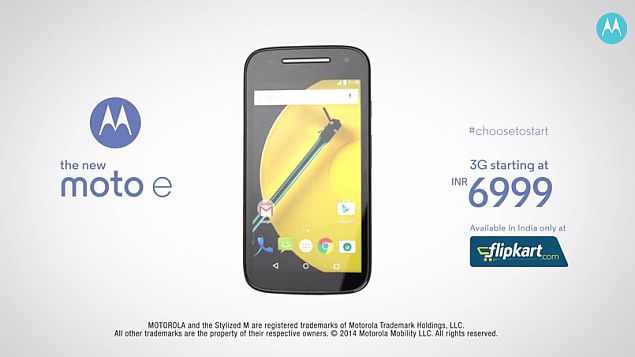 The company has gone with a 5-megapixel rear camera again on the handset, while this time there is a 0.3-megapixel front camera also onboard. The new Moto E comes with 8GB of built-in storage, which is double the storage on Moto E, and supports expandable storage via microSD card (up to 32GB).