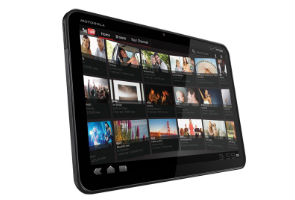 Highlights
Motorola Mobility Holdings Inc., the maker of cellphones and cable set-top boxes that split off from the rest of Motorola in January, said Thursday that it narrowed its loss in the first quarter as it nearly doubled shipments of smartphones.

Excluding stock-based compensation and amortization of intangibles, the loss was 8 cents per share, less than the 11 cents per share loss analysts surveyed by FactSet had expected, on average.

Motorola Mobility shipped 9.3 million of these products during the period, including 4.1 million smartphones and over 250,000 of its recently released Xoom tablet computer. Last year, the company shipped 8.5 million mobile devices -- 2.3 million of them smartphones -- in the first quarter.

"I think we're making good progress on transitioning Motorola into a smartphone and a mobile computing company," CEO Sanjay Jha said in an interview.

The company would not give specifics about how many of the Xooms shipped were actually sold, but Chief Financial Officer Marc Rothman said he was "pleased" with sales of the tablet. The Xoom, which runs on the tablet-geared version of Google Inc.'s Android operating software, was released in late February.

The company said it expects smartphone and tablet sales to rise compared with the first quarter, and believes revenue will also climb.

While some tech companies are suffering from supply-issues in the wake of the Japan earthquake in March, Jha said that much of Motorola Mobility's supply chain was unaffected. The company expects no significant impact from the disaster in the current quarter, he said.