The upcoming Motorola phone is teased to offer good ‘performance and camera’. 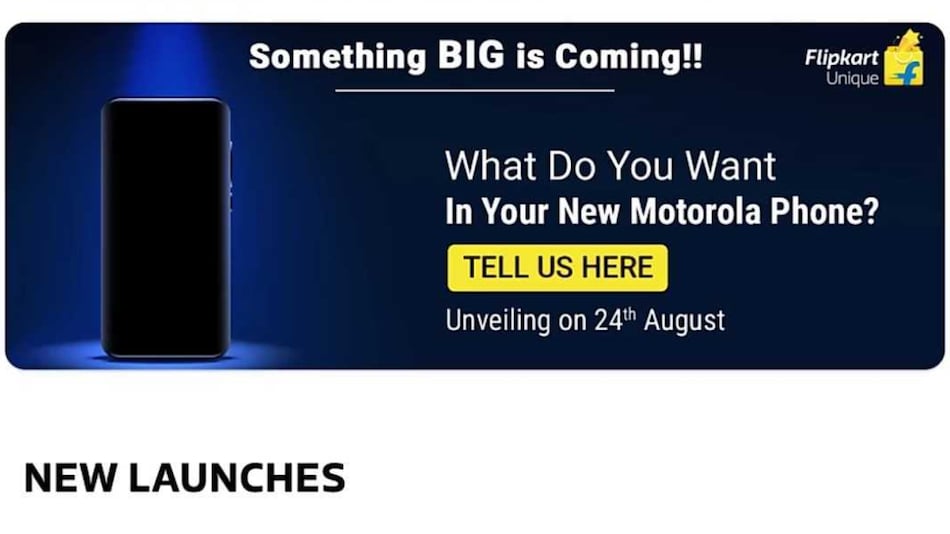 Motorola is teasing the arrival of a new phone in the India market. The company took to Twitter to tease the launch of a new phone in the country and has also published a teaser on Flipkart hinting at its availability. While the company hasn't revealed a launch date, Flipkart says that the new smartphone will arrive on August 24. Motorola hasn't unveiled the name of the phone as of yet. However, we won't have to wait too long to know all of the official details.

Motorola teased the launch of a new phone via Twitter. It shared a video that highlights the camera and performance prowess of the new upcoming phone. The teaser hints at a rear fingerprint sensor with a Motorola logo embossed inside, physical buttons for volume and power positioned on the sides. It also offers a glimpse of USB Type-C port and speaker grille positioned at the bottom. The name of the device has not been revealed in this latest video teaser, but availability has been confirmed on Flipkart.

Flipkart is also teasing the arrival of a new Motorola phone on its app, reconfirming availability of the device on the e-commerce platform. The teaser also reveals that the phone will launch on August 24, something that the Motorola tweet didn't reveal. The phone's outline suggests slim edges, with physical buttons on the right side. Flipkart calls it a ‘BIG' surprise, hinting at a large display size. There's also a survey about the mystery phone, and through this, Flipkart teases the inclusion of a large battery and display, a Qualcomm Snapdragon processor, and multiple cameras at the back of the device.

While Motorola or Flipkart offer no clarity on what this smartphone will be called, the Moto E7 Plus has been spotted in several recent leaks and Motorola could well just launch this device next week. Of course, this is pure speculation from our end and all official details will only be known on Monday. The Moto E7 Plus was recently leaked with a Snapdragon 450 SoC and a 48-megapixel dual camera setup.

BlackBerry 5G Phone With Physical Keyboard Set to Debut in 2021