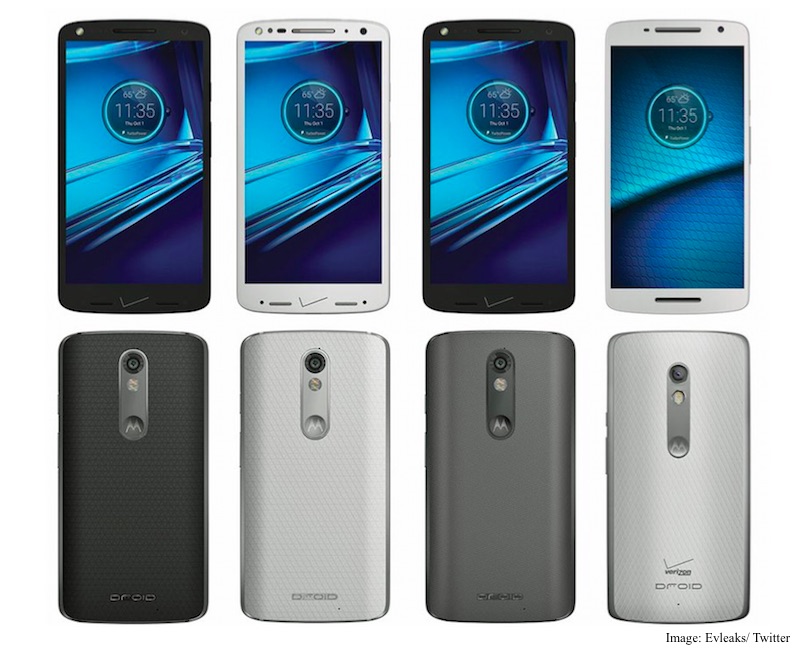 With only a few hours left for the expected launch of the Motorola Droid Turbo 2 and the Droid Maxx 2, alleged official renders as well as brochures of both the handsets have surfaced on the Web. The images reveal the design language of the Nexus 6 in both the new handsets, and give us the best glimpse at them.

If the images posted by prolific tipster Evan Blass aka @evleaks are anything to go by, the front panel of the Droid Turbo 2 as well as the Droid Maxx 2 looks a lot like that on the Nexus 6, with the speakers placed in a similar position. One of the handsets, probably the Droid Turbo 2, also seems to have a fingerprint sensor on top, though it is not entirely clear at the moment.

Last week, Verizon Wireless accidentally put up the information of the Turbo 2 on its website revealing several more details of the handset. As per which, the Turbo 2 will offer a 2-day battery life, and a "shatterproof" display. The phone is also apparently going to offer support for faster charging, giving 13 hours of battery life to the handset in just 15 minutes of charging. Brochures of the handsets, seemingly made by Verizon for marketing purposes, have now also leaked.

As per the leaked brochures (via PhoneArena), the Droid Turbo 2 sports a 5.43-inch QHD display (up from 5.2-inch QHD screen in the original Turbo), a Snapdragon 810 SoC (MSM8994), 3GB of RAM, and inbuilt storage variants of 32GB and 64GB, as per a previous report. The handset is expected to come with a 21-megapixel and 5-megapixel camera sensors. The company will offer Droid Turbo 2 as well as Droid Maxx 2 users to customise the design (Moto Maker program) of the handsets as they see fit.

As for the Droid Maxx 2, the brochure reveals a 5.5-inch FHD (1920x1080) display. It is powered by Snapdragon 615 SoC coupled with 16GB of inbuilt storage that can be expanded up to 128GB via microSD card. Users will have an option to choose between a Deep Sea Blue back or White with Winter White back.