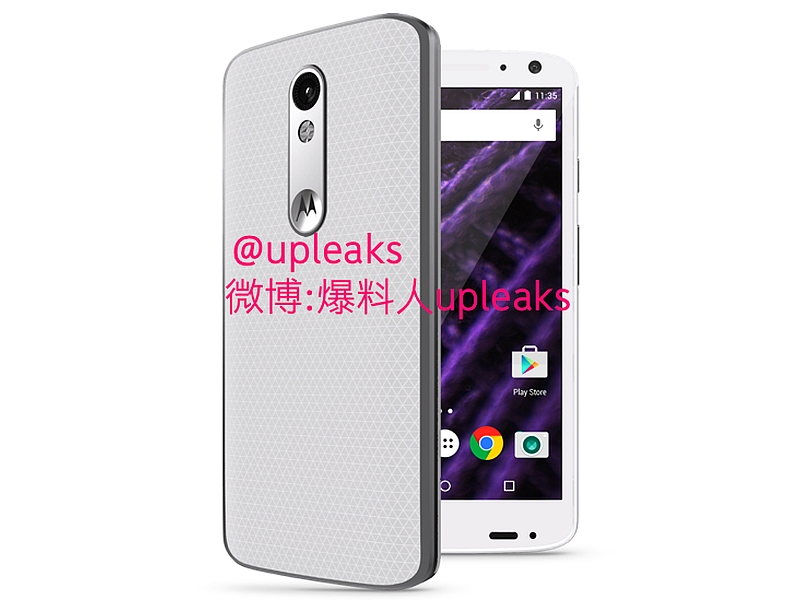 Seems like Motorola, besides working on its next-generation Moto 360 smartwatch, is also working on a new and more powerful smartphone dubbed as Motorola Bounce. The smartphone, as per the leaked set of specifications by a known tipster, looks like a slightly upgraded version of the recently announced Moto X Style.

The rumoured Motorola Bounce, as seen in the image shared by @upleaks on Twitter (seen above) on Monday, appears to come with the same design profile as the Lenovo-owned firm's recently announced handsets. However, the side bezels of the device make the smartphone look studier.

As per the tweet, the Motorola Bounce will feature a 5.43-inch QHD (1440x2560 pixels) resolution display and would come powered by Qualcomm Snapdragon 810 SoC, clubbed with 3GB of RAM and Adreno 430 GPU. The handset is supposed to sport a 21-megapixel rear camera and a 5-megapixel front-facing camera. The battery capacity of the handset is said to be 3,760mAh, which if true would be one of the high capacity smartphone batteries in the market. As for the inbuilt storage, the Bounce would come in 32GB and 64GB variants.

Interestingly, the tweet also mentions the unannounced smartphone to be "shatterproof", which could indicate a MIL-STD rating, and explains the 'Bounce' in the name. December is said to be the launch month for the Motorola Bounce.

Motorola, besides its Bounce smartphone, is reportedly also working on a next-gen Moto 360 smartwatch. The smartwatch's rendered images were leaked on Monday tipping two size variants. The leaked image also indicates the upcoming Moto 360 to launch in two case and band options. The external lugs are also seen on the new Moto 360 smartwatch image, as well as the crown button in the 2 o'clock position.